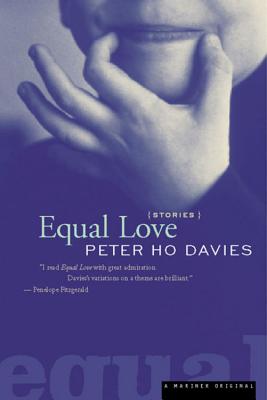 Peter Ho Davies's award-winning debut collection, The Ugliest House in the World, drew comparisons to the work of Raymond Carver, James Joyce, and V. S. Naipaul. The Washington Post hailed it as "astounding . . . Davies has left a unique, definitive footprint in the soil of contemporary short fiction." In his new collection, Davies's unforgettable characters—a Chinese son gambling with professional mourners, a mixed-race couple who experience a close encounter—strive for a love that transcends time, race, and sexuality. These are the stories of a sandwich generation—children of one century, adults of the next—caught between debts to their parents and what they owe their own offspring. Shot through with humor and grace, Equal Love confirms Davies's reputation as one of his generation's foremost writers.

"The subject matter of most of these stories--the small but also vast world of relationships--is well-traveled territory for short story writers. But Ho's own geographical history (born in England to Welsh and Chinese parents, now lives in the U.S.) helps give his work an original stamp. This collection demonstrates a familiarity with the often-subtle differences between daily life in the U.S. and the U.K., and Ho is equally at home when he sets "The Next Life" in San Francisco's Chinatown. With his variety of settings comes a variety of voices: the narrator of "Brave Girl," trying to help her father navigate the aftermath of divorce; a mathematician in "Small World," revisiting the scenes of his Irish-Catholic boyhood and his first love; a retired encyclopedia salesman who can't stop selling himself in "Sales"; a junkie trying to regain custody of her son in "Everything You Can Remember in 30 Seconds Is Yours to Keep." Ho manages to convey all his characters' predicaments with finesse, and his emotional and geographical range are equally wide." Mary Ellen Quinn, Copyright© 2000, American Library Association. All rights reserved Booklist, ALA

"Degrees and permutations of estrangement from loved ones and homeland are examined with subdued emotion in this second collection (The Ugliest House in the World, 1997) from an author of unusually mixed (Chinese-Welsh) ancestry. The first of these 12 stories, ``The Hull Case,'' may be the best. Based on the true history of Betty and Barney Hill, it reshapes a reported incident of alien abduction into plaintive portrayal of an interracial New Hampshire couple whose ``story'' of their ordeal aboard a spaceship may just be an expression of their yearning toward a place where they can belong. A handful of the stories feel fragmentary, capable of much fuller development: for example ``Today is Sunday,'' in which a father and son sort out their wary relationship during a nursing home visit to the latter's senile grandmother; ``Sales,'' which seems to be Davies's version of ``Death of a Salesman''; and the title piece, a relentlessly terse revelation of the varieties of sexual attraction, fidelity, and truthfulness indulged by two married couples who've been longtime friends. Stories that benefit from Davies's economical, suggestive approach include ``Frogmen,'' a well-constructed portrayal of how a neighborhood full of preadolescent kids reacts to the disappearance of one of their friends, and ``Cakes of Baby,'' in which a tense Thanksgiving family get-together brings out the tensions in a sophisticated couple's childless marriage. Even better are ``On the Terraces,'' which dramatizes in carefully understated sentences the confused emotions felt by a young man keeping vigil as his beloved older brother lies dying of AIDS; and ``Small World,'' about a married insurance salesman's brief fling with an old girlfriend, which he recognizes as an effort to recapture and somehow alter his past. Interesting stories, full to bursting with promising unexplored further dramatic possibilities. It may be time for Davies to attempt his first novel." Kirkus Reviews

"We infect our children with ideas about love. Peter Ho Davies hammers it home in these 13 stories, which show, in no uncertain terms, exactly how. Our explanations for divorce are inadequate ("We love you, but we don't love each other anymore"; therefore, the 6-year-old discovers, love is impermanent); the reasons we marry are inadequate and infinite; and our ideas about faithfulness are so various as to be equally inadequate. Children in Davies' stories climb to adulthood and parenthood with unusable scaffolding. One of my favorites is "The Hull Case," about a mixed-race couple abducted by aliens. As they report the incident to an army colonel, subtle questions of trust and credibility bubble up between the colonel, the black husband and the white wife. She is convinced that if she reveals everything about the abduction, she —