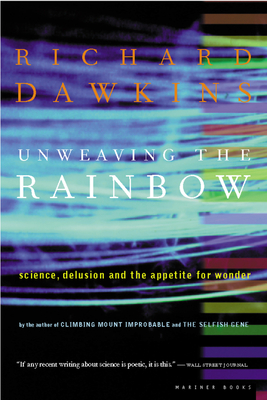 Science, Delusion and the Appetite for Wonder

Did Newton "unweave the rainbow" by reducing it to its prismatic colors, as Keats contended? Did he, in other words, diminish beauty? Far from it, says acclaimed scientist Richard Dawkins; Newton's unweaving is the key to much of modern astronomy and to the breathtaking poetry of modern cosmology. Mysteries don't lose their poetry because they are solved: the solution often is more beautiful than the puzzle, uncovering deeper mysteries. With the wit, insight, and spellbinding prose that have made him a best-selling author, Dawkins takes up the most important and compelling topics in modern science, from astronomy and genetics to language and virtual reality, combining them in a landmark statement of the human appetite for wonder.
This is the book Richard Dawkins was meant to write: a brilliant assessment of what science is (and isn't), a tribute to science not because it is useful but because it is uplifting.

Praise For Unweaving the Rainbow: Science, Delusion and the Appetite for Wonder…

"Brilliance and wit." The New Yorker

"An extended rebuttal - not so much by argument as by radiant example - of perennial anti-science convictions. Few among us are better qualified for the job. If any recent writing about science is poetic, it is this." The Wall Street Journal

"Like an extended stay on a brain health-farm . . .You come out feeling lean, tuned and enormously more intelligent." The Times of London

RICHARD DAWKINS taught zoology at the University of California at Berkeley and at Oxford University and is now the Charles Simonyi Professor of the Public Understanding of Science at Oxford, a position he has held since 1995. Among his previous books are The Ancestor’s Tale, The Selfish Gene, The Blind Watchmaker, Climbing Mount Improbable, Unweaving the Rainbow, and A Devil’s Chaplain. Dawkins lives in Oxford with his wife, the actress and artist Lalla Ward.
Loading...
or support indie stores by buying on