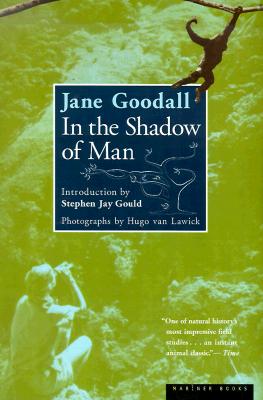 In the Shadow of Man

This best-selling classic tells the story of one of the world's greatest scientific adventures. Jane Goodall was a young secretarial school graduate when the legendary Louis Leakey chose her to undertake a landmark study of chimpanzees in the wild. In the Shadow of Man is an absorbing account of her early years at Gombe Stream Reserve, telling us of the remarkable discoveries she made as she got to know the chimps and they got to know her. This paperback edition, illustrated with 80 photographs, includes an introduction by Stephen Jay Gould and a postscript by Goodall.
During Goodall's forty years of studying chimpanzees, she has become one of the world's most honored scientists. She tells of the later years in THROUGH A WINDOW, also available in Mariner paperback. AFRICA IN MY BLOOD: AN AUTOBIOGRAPHY IN LETTERS tells the story, through her letters, of childhood through the early years at Gombe.


Praise For In the Shadow of Man…

"Apart from its enormous scientific value, IN THE SHADOW OF MAN is absolutely fascinating to read as a story of discovery . . . The whole book is enthralling." Boston Globe

"I can't imagine a more vivid or unexpectedly moving introduction to chimpanzees in the wild than Jane Goodall's." -- George Stade The New York Times

Jane Goodall was a young secretarial school graduate when Louis Leakey sent her to Tanzania in 1960 to study chimpanzees. She later received a Ph.D. from Cambridge University and has become one of the world's most honored scientists and writers. Jane Goodall's research on chimpanzees has been described by Stephen Jay Gould as "one of the Western world's great scientific achievements." Her books include the recent REASON FOR HOPE, IN THE SHADOW OF MAN, and THROUGH A WINDOW. She is the co-author with Dale Peterson of VISIONS OF CALIBAN. She resides in Tanzania.
Loading...
or
Not Currently Available for Direct Purchase