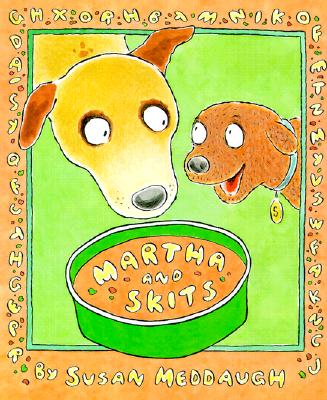 Martha’s family has a little surprise for her — a puppy. Martha’s world is turned topsy-turvy as she attempts to adjust to Skits, the exuberant, unabashed addition to the household. After the initial chaos, all seems to be going along quite smoothly until Skits does the unforgivable — crashes into Martha’s bowl of alphabet soup, spilling it everywhere. Martha decides she can no longer just watch from the safety of her chair. She must take charge and lay down the law for the pup. But when the family insists that Skits be more like Martha, something terrible happens! It’s up to Martha to help Skits realize just how special he is.

"This has all the fun that children have come to expect from Martha’s appealing adventures." —Booklist Booklist, ALA

"Plain, savvy Martha and big, dorky Skits are an endearing canine pair, and Martha fans will lap this up." —The Bulletin 11/00 The Bulletin of the Center for Children's Books

Susan Meddaugh was born and raised in Montclair, New Jersey. She graduated from Wheaton College, where she studied French literature and fine arts. After working briefly with an advertising agency in New York, she moved to Boston and worked at a publishing company for ten years, first as a designer, then art editor, and finally as art director. While there, she did the illustrations for Good Stones (Houghton Mifflin) by Anne Epstein, and then decided to strike out on her own as a freelance illustrator and creator of children's books. Since that time, Susan has written and illustrated many popular books for children, including Martha Speaks, which was chosen as a New York Times Best Illustrated Book for 1992. In 1998 she was awarded the New England Book Award, given by the New England Booksellers Association to recognize a body of work. Her work also was acknowledged with a New York Times Best Illustrated Award. She lives in Sherborn, Massachusetts.