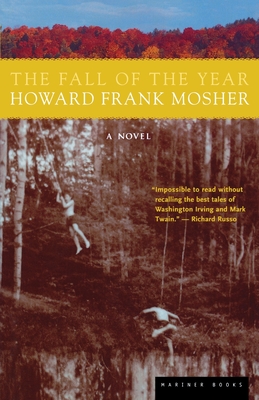 The Fall of the Year

Set in the beautiful mountains of Kingdom County, THE FALL OF THE YEAR is Howard Frank Mosher's brilliant autobiographical novel about love in all its forms, from friendship to the most passionate romance, in a place where family, community, vocation, and the natural world still matter profoundly. Here are the lively stories of the eccentric inhabitants of Kingdom County, including Louvia the Fortuneteller; Foster Boy Dufresne, the local bottle picker; and the daredevil tomboy Molly Murphy, who risks her life to fulfill her dream of running away with the Greatest Little Show on Earth. Mosher's kingdom is "timeless. It existed well before man, has survived his spell upon it, and will do so long after the curtain has fallen" (Washington Post Book World).

Praise For The Fall of the Year…

"Wields the power to pull the reader like a magnet into its world and will not let go until the story is told." --NEW ORLEANS TIMES-PICAYUNE

"Howard Frank Mosher is, for my money, the most natural storyteller around . . . THE FALL OF THE YEAR, which is impossible to read without recalling the best tales of Washington Irving and Mark Twain, is no exception." --Richard Russo

HOWARD FRANK MOSHER is the author of ten books, including Waiting for Teddy Williams, The True Account, and A Stranger in the Kingdom, which, along with Disappearances, was corecipient of the New England Book Award for fiction. He lives in Vermont.
Loading...
or support indie stores by buying on