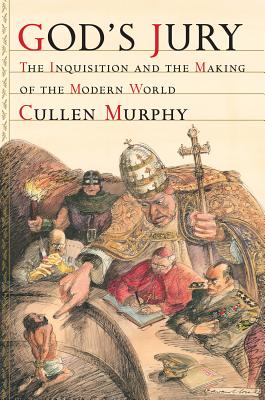 “The Inquisition is a dark mark in the history of the Catholic Church. But it was not the first inquisition nor the last, as Cullen Murphy shows in this far-ranging, informed, and (dare one say?) witty account of its reach down to our own time, in worldly affairs more than ecclesiastical ones.” — Margaret O’Brien Steinfels, former editor, Commonweal

The Inquisition conducted its last execution in 1826 — the victim was a Spanish schoolmaster convicted of heresy. But as Cullen Murphy shows in this provocative new work, not only did its offices survive into the twentieth century, in the modern world its spirit is more influential than ever.

God’s Jury encompasses the diverse stories of the Knights Templar, Torquemada, Galileo, and Graham Greene. Established by the Catholic Church in 1231, the Inquisition continued in one form or another for almost seven hundred years. Though associated with the persecution of heretics and Jews — and with burning at the stake — its targets were more numerous and its techniques more ambitious. The Inquisition pioneered surveillance and censorship and “scientific” interrogation. As time went on, its methods and mindset spread far beyond the Church to become tools of secular persecution. Traveling from freshly opened Vatican archives to the detention camps of Guantánamo to the filing cabinets of the Third Reich, Murphy traces the Inquisition and its legacy.

With the combination of vivid immediacy and learned analysis that characterized his acclaimed Are We Rome?, Murphy puts a human face on a familiar but little-known piece of our past, and argues that only by understanding the Inquisition can we hope to explain the making of the present.

Praise For God's Jury: The Inquisition and the Making of the Modern World…

"In his typically compelling style.....Murphy powerfully shows that the impulse to inquisition can quietly take root in any system—civil or religious—that orders our lives."--Publishers Weekly "Entertaining, lively chronicle of the Inquisition, touching on a wide variety of issues across the centuries."--Kirkus Reviews
"Cullen Murphy's account of the Inquisition is a dark but riveting tale, told with luminous grace. The Inquisition, he shows us, represents more than a historical episode of religious persecution. The drive to root out heresy and sin, once and for all, is emblematic of the modern age and a persisting danger in our time."
--Michael J. Sandel, author of Justice: What's the Right Thing to Do?
"From Torquemada to Guantanamo and beyond, Cullen Murphy finds the 'inquisorial Impulse' alive, and only too well, in our world. His engaging romp through the secret Vatican archives shows that the distance between the Dark Ages and Modernity is shockingly short. Who knew that reading about torture could be so entertaining?"
--Jane Mayer, author of The Dark Side.
"God's Jury is a reminder, and we need to be constantly reminded, that the most dangerous people in the world are the righteous, and when they wield real power, look out. At once global and chillingly intimate in its reach, the Inquisition turns out to have been both more and less awful than we thought. Murphy wears his erudition lightly, writes with quiet wit, and has a delightful way of seeing the past in the present."
--Mark Bowden, author of Guest of the Ayatollah
"When virtue arms itself - beware! Lucid, scholarly, elegantly told, God’s Jury is as gripping as it is important."
--James Carroll, author of Jerusalem, Jerusalem
"There will never be a finer example of erudition, worn lightly and wittily, than this book. As he did in Are We Rome?, Cullen Murphy manages to instruct, surprise, charm, and amuse in his history of ancient matters deftly connected to the present."
--James Fallows, National Correspondent for The Atlantic
"The Inquisition is a dark mark in the history of the Catholic Church. But it was not the first inquisition nor the last as Cullen Murphy shows in this far-ranging, informed, and (dare one say?) witty account of its reach down to our own time in worldly affairs more than ecclesiastical ones."
-- Margaret O'Brien Steinfels, former editor, Commonweal

Cullen Murphy is the editor at large at Vanity Fair and the former managing editor of the Atlantic Monthly. He is the author of Are We Rome?, The Word According to Eve, and the essay collection Just Curious.