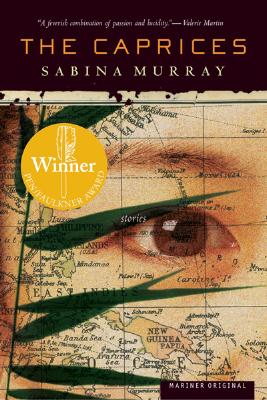 From an acclaimed young author of Filipino background comes this history told through individual lives. The Caprices revolves around the Pacific Campaign of World War II. In the wreckage of bombed cities and overcrowded prison camps, there were no winners and no conquerors, and no nation truly triumphed.
Set in Southeast Asia, Australia, and the United States, these stories bring to life ordinary people who must rely on extraordinary measures of faith and imagination. In “Order of Precedence,” an Indian officer starving to death in a prison camp remembers playing polo during his days in India. In “Folly,” the last days of Amelia Earhart are imagined as the Japanese prepare for war. In “Colossus,” an American veteran in his eighties recalls the Japanese invasion of the Philippines and the infamous death march of 1941. With lyrical prose and searing insight, Sabina Murray brings to light a complex cast of characters. Eloquent, artful, and brimming with raw emotion, these tales capture the gross injustices of war as well as the consequences of survival and the memories that follow. In stories that tell as much about the fluid nature of time as they do about the ghosts that haunt survivors, Sabina Murray establishes herself as a passionate and wise voice.


Praise For The Caprices…

[Murray] turns the bombed-out and broken setting of World War II into a theater for humankind, where weakness and grace are writ large.
The Washington Post

Murray crafts her pieces as series of snapshots...that alternately zoom to details and step back for panoramic historical sweeps.
Milwaukee Journal Sentinel

Murray has marshalled searing prose to construct tales of faith (more often than not unwarranted), courage and savagery.
The Seattle Times

"The Caprices" grapples with regrettably marginalized but extraordinarily significant events of World WarII...[Murray} fuse[s] together the ordinary and incomprehensible.
The San Francisco Chronicle

At her most effective, Murray writes stories of fierce intensity, stories that are evocative, distinct and haunting.
The New York Times Book Review

The two notions of war as another planet and of cognitive displacement are endered with chance timing and shocking force...
The New York Times

War is an unusual subject for a young female writer; with each piece, Murray proves to be increasingly exceptional.
Publishers Weekly, Starred