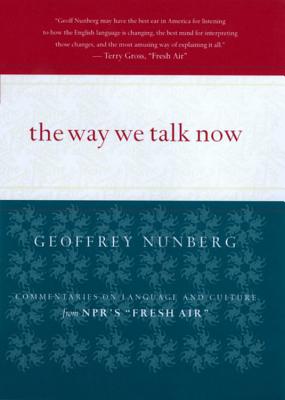 The Way We Talk Now

Commentaries on Language and Culture from NPR's Fresh Air

This engaging collection of National Public Radio broadcasts and magazine pieces by one of America’s best-known linguists covers the waterfront of contemporary culture by taking stock of its words and phrases. From our metaphors for the Internet (“Virtual Rialto”) to the perils of electronic grammar checkers (“The Software We Deserve”), from traditional grammatical bugaboos (“Sex and the Singular Verb”) to the ways we talk about illicit love (“Affairs of State”), Geoffrey Nunberg shows just how much the language we use from day to day reveals about who we are and who we want to be.

Praise For The Way We Talk Now: Commentaries on Language and Culture from NPR's Fresh Air…

"In a chatty, accessible style, he takes American catchwords and colloquialisms and turns them into signifiers of shared experience." Philadelphia City Paper

"Most occasional pieces lose their freshness in hard covers, but Geoffrey Nunberg's commentaries on language…are a happy exception." Boston Globe

"Nunberg offers homages and brickbats to the popular culture, especially as it is spoken and written." Kirkus Reviews

"Humorous commentaries about language in the United States." Library Journal

[A] lighthearted but pithy analysis of the changing ways Americans talk and write." Columbus Dispatch

"Contains [Nunberg's] ruminations on the strange twists and turns of English as spoken in America." Columbus Dispatch

Geoffrey Nunberg is a principal scientist at the Xerox Palo Alto Research Center and a consulting professor in the Department of Linguistics at Stanford University. He is also chair of the Usage Panel of the American Heritage Dictionary of the English Language. He has published many articles in the scholarly and popular press and made numerous radio broadcasts on language and linguistics, the cultural implications of digital technologies, and language policy issues. For this work, he was given the 2001 Language, Linguistics, and the Public Interest Award by the Linguistic Society of America.
Loading...
or support indie stores by buying on