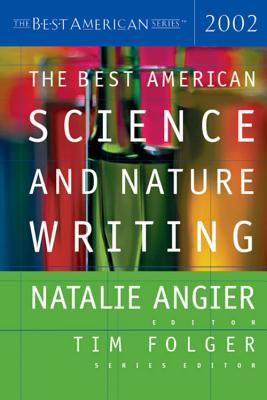 Since its inception in 1915, the Best American series has become the premier annual showcase for the country's finest short fiction and nonfiction. For each volume, a series editor reads pieces from hundreds of periodicals, then selects between fifty and a hundred outstanding works. That selection is pared down to the twenty or so very best pieces by a guest editor who is widely recognized as a leading writer in his or her field. This unique system has helped make the Best American series the most respected -- and most popular -- of its kind.

The Best American Science and Nature Writing 2002, edited by Natalie Angier, is another "eclectic, provocative collection" (Entertainment Weekly). Malcolm Gladwell, Joy Williams, Barbara Ehrenreich, Burkhard Bilger, Dennis Overbye, and many more of the best and brightest writers on science and nature explore such topics as the rise and fall of Islamic science, disappearing cancers, and the meaning of mountain lions in the back yard.

"An elite grouping of very readable and informative articles on some of today's most challenging and colorful scientific issues." Kirkus Reviews

NATALIE ANGIER is a Pulitzer-Prize winning science columnist for the New York Times. She is the author of The Canon, The Beauty of the Beastly, and Natural Obsessions. She lives outside Washington, D.C.