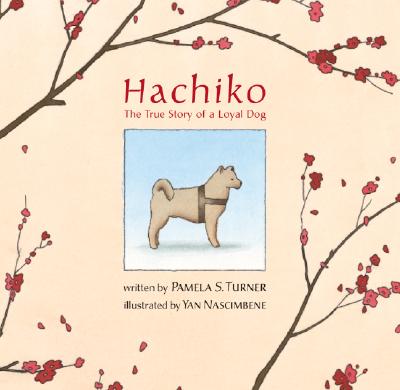 The True Story of a Loyal Dog

Imagine walking to the same place every day, to meet your best friend. Imagine watching hundreds of people pass by every morning and every afternoon. Imagine waiting, and waiting, and waiting. For ten years. This is what Hachiko did.
Hachiko was a real dog who lived in Tokyo, a dog who faithfully waited for his owner at the Shibuya train station long after his owner could not come to meet him. He became famous for his loyalty and was adored by scores of people who passed through the station every day. This is Hachiko’s story through the eyes of Kentaro, a young boy whose life is changed forever by his friendship with this very special dog. Simply told, and illustrated with Yan Nascimbene’s lush watercolors, the legend of Hachiko will touch your heart and inspire you as it has inspired thousands all over the world.

Praise For Hachiko: The True Story of a Loyal Dog…

"Turner unfolds this poignant true story in the natural, unaffected voice of Kentaro, who wonders at the dog's unswerving devotion. Unobtrusive details evoke a sense of place... as does Nascimbene's spare line-and-watercolor artwork, reminiscent of Japanese woodblock prints... This will resonate with any child who has loved a dog and been loved in return." Booklist, ALA, Starred Review

Pamela S. Turner has a master’s degree in public health from the University of California, Berkeley, and a special interest in microbiology and epidemiology. Her articles for children and adults have appeared in numerous scientific publications. Her books include Hachiko: The True Story of a Loyal Dog, Gorilla Doctors, The Frog Scientist, Dolphins of Shark Bay, and Project Seahorse. She lives in California.
www.pamelasturner.com