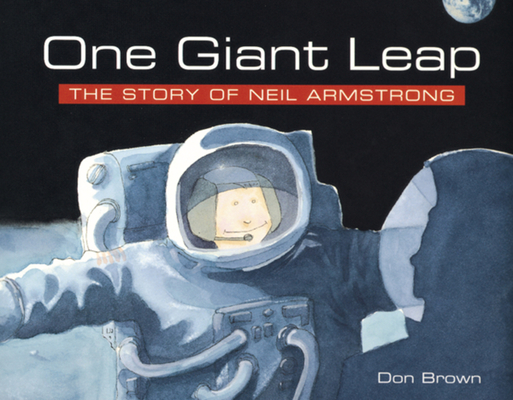 The Story of Neil Armstrong

As a young boy, Neil Armstrong had a recurring dream in which he held his breath and floated high above the people, houses, and cars. He spent his free time reading stacks of flying magazines, building model airplanes, and staring through the homemade telescope mounted on the roof of his neighbor's garage. As a teenager, Neil became obsessed with the idea of flight, working odd jobs to pay for flying lessons at a nearby airport. He earned his student pilot's license on his sixteenth birthday. But who was to know that this shy boy, who also loved books and music, would become the first person to set foot on the moon, on July 20, 1969. Here is the inspiring story of one boy's dream - a dream of flying that landed him more than 200,000 miles away in space, gazing upon the awesome sight of a tiny earth hanging suspended in a perfectly black sky. On the thirtieth anniversary of the moon landing, Don Brown's expressive story reveals the achievement of this American legend, Neil Armstrong, re

Don Brown is the award-winning author and illustrator of many picture book biographies. He has been widely praised for his resonant storytelling and his delicate watercolor paintings that evoke the excitement, humor, pain, and joy of lives lived with passion. School Library Journal has called him "a current pacesetter who has put the finishing touches on the standards for storyographies." He lives in New York with his family.


Praise For One Giant Leap: The Story of Neil Armstrong…

"From Brown, a pithy look at one of the national heroes of the space age. Recurring vivid dreams of floating high above his neighborhood sparked Neil Armstrong's fascination with flight and led ultimately to a life spent among the clouds and stars. The first half of this brief biography showcases Armstrong's childhood, his hobbies, part-time jobs, and determination to earn a pilot's license. The second part highlights his historic flight to the moon and the thrill of being the first human to set foot on its surface. Brown's text is simple enough for very young children to enjoy, while the accompanying illustrations skillfully use perspective to capture the world through a child's eyes. The story has been told many times, but perhaps never with so much heart and spirit." Kirkus Reviews
or
Buy Here
Copyright © 2020 American Booksellers Association