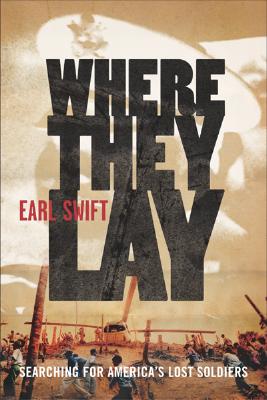 Where They Lay melds an account of an elite military team's high-tech, high-risk search for a Vietnam War pilot's remains with a remarkably immediate and poignant retelling of his final intense hours.
In far-flung rain forests and its futuristic lab near Pearl Harbor, the Central Identification Laboratory (CILHI) strives to recover and identify the bodies of fighting men who never came home from America’s wars. Its mission combines old-fashioned bushwhacking and detective work with the latest in forensic technology.
Earl Swift accompanies a CILHI team into the Laotian jungle on a search for the remains of Major Jack Barker and his three-man crew, whose chopper went down in a fireball more than thirty years ago. He interweaves the story of the recovery team's work with a tense account of Barker's fatal attempt to rescue trapped soldiers during the largest helicopter assault in history. Swift is the first reporter ever allowed to follow a recovery mission, as these unique archaeological digs are called, in its entirety, and he got his hands dirty, combing the jungle floor for clues amid vipers, monsoons, and unexploded bombs.
Where They Lay resounds with admiration for those who fell and those who seek them. But Swift also raises hard questions about these recovery missions. Is it worth $100 million a year to try to bring home the lost from old wars? Is it worth the lives of today's soldiers? (Seven Americans died in the line of duty just months before Swift went in country.) And is the effort compromised by the corruption among native officials overseeing missions in their countries?
As new conflicts draw our attention, Where They Lay throws brilliant light on war's cost to soldiers and to those they leave at home.

Praise For Where They Lay: Searching for America's Lost Soldiers…

"This solid and informative study by a seasoned military journalist offers the first full-scale account of the work of the Central Identification Laboratory." Publishers Weekly