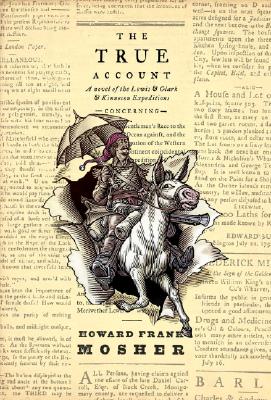 In the spring of 1804, Private True Teague Kinneson -- schoolmaster, inventor, playwright, and explorer -- sets out with his nephew, Ticonderoga, to race Meriwether Lewis and William Clark to the Pacific. Along the way True and Ti encounter Daniel Boone and his six-foot-two spinster daughter, Flame Danielle; fight and trick a renegade army out to stop Lewis's expedition; invent baseball with the Nez Perce; hold a high-stakes rodeo with Sacagawea's Shoshone relatives; and outwit True's lifelong adversary, the Gentleman from Vermont, a.k.a. the devil himself. And when a beautiful and mysterious Blackfoot girl named Yellow Sage Flower Who Tells Wise Stories enters the tale, things start to get really interesting.
The True Account, which Lawrence Millman calls "part riotous adventure, part book of wonders, and part historical travesty," is the hilarious and sometimes heartbreaking story of a man "whose imagination is unfettered by either convention or fact, whose hopefulness and good nature yield to no force, and whose ways and stays rank second to none in the history of the world."


Praise For The True Account: Concerning a Vermont Gentleman's Race to the Pacific Against and Exploration of the Western American Continent Coincid…

"Fun and fanciful with much to savor, Mosher's novel demonstrates a boundless imagination and a light comic touch." Publishers Weekly

"An erudite and absorbing tweak of the Great Exploration." Kirkus Reviews