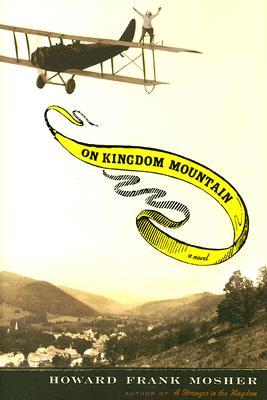 Set in northern Vermont in 1930, On Kingdom Mountain introduces us to Miss Jane Hubbell Kinneson. A renowned local bookwoman and eccentric bird carver, she is the last remaining resident of a wild mountain on the U.S.-Canadian border, now threatened by a proposed new highway known as the Connector.

On her fiftieth birthday, a mysterious stunt pilot and weathermaker enters her life when his biplane crashes on the frozen lake at the foot of her mountain. He brings with him a riddle -- handed down from his grandfather -- containing clues to the whereabouts of $100,000 in stolen Civil War gold that may have been hidden on Miss Jane's property. As she and the footloose aviator begin to search for the treasure, Miss Jane finds herself confronted by the most important decisions of her life.

Featuring daring action scenes and outrageous comedy, along with a passionate and surprising love affair, On Kingdom Mountain represents traditional storytelling at its best, rooted deeply in Howard Mosher’s own family history and in a way of life on the brink of extinction.

HOWARD FRANK MOSHER is the author of ten books, including Waiting for Teddy Williams, The True Account, and A Stranger in the Kingdom, which, along with Disappearances, was corecipient of the New England Book Award for fiction. He lives in Vermont.
Loading...
or
Not Currently Available for Direct Purchase