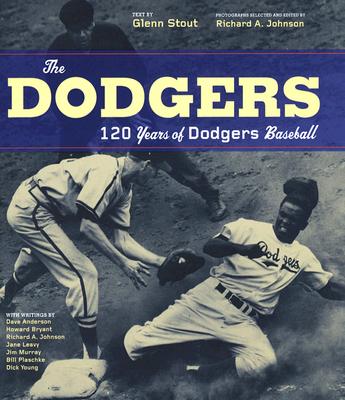 Dodgers. The word conjures different things to different people, but its distinction — and notoriety — is universal. In the annals of baseball, the history of few other teams can compare to the rich legacy of the Dodgers. Their constituency includes fans from Bensonhurst to Burbank. Their colorful past — “dem bums,” Jackie Robinson and the boys of summer, Walter O’Malley, Sandy Koufax, Tommy Lasorda, “bleeding Dodger blue” — has enlivened baseball in innumerable, immeasurable ways. And their legacy, casting a 120-year shadow, remains essential to the very nature of the game.
In a compelling, insightfully written narrative and more than two hundred unforgettable photographs, many never before seen, The Dodgers: 120 Years of Dodgers Baseball tells the team's story in its entirety, from its birth in Brooklyn in 1884 and its early glories, to the heart-wrenching move to Los Angeles in 1958, to the present day. The Dodgers' evolution, and particularly their willingness to embrace change even when it was a wildly unpopular choice, is also, writes Glenn Stout in his introduction, “an inherently American story that follows a familiar path, a story of immigration, assimilation, migration, and change.” In one of the only books to look at the team as a unified whole, we see how the Dodgers helped create modern baseball in Brooklyn, how they ushered the game into its contemporary form with the signing of Jackie Robinson in 1945, and how they have borne witness to the metamorphosis of baseball from an amateur game played by gentlemen into a multibillion-dollar business. It's all here, a century and more of history-making baseball. In these pages, readers will experience some of the game's finest moments, greatest plays, and most unforgettable players, including

• the birth of the “Trolley Dodgers” in an unlikely borough • a legendary series of stirring pennant races in the late 1940s and 1950s • Jackie Robinson and the integration of baseball • the notorious move from East Coast to West at the hands of the much-maligned Walter O’Malley • the reemergence of the Dodgers-Giants rivalry in California • the game's most dynamic pitching duo, Sandy Koufax and Don Drysdale • Kirk Gibson’s dramatic home run in the 1988 World Series * and lively essays by such heralded Dodger chroniclers as Dave Anderson, Jane Leavy, Bill Plaschke, Dick Young, and others

RICHARD JOHNSON is the author of New England Patriots: Yesterday and Today. He is also the curator of the Sports Museum of New England. A native of Worcester, he lives in Braintree, Massachusetts.