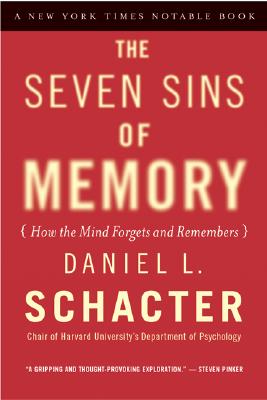 The Seven Sins of Memory

How the Mind Forgets and Remembers

A groundbreaking work by one of the world's foremost psychologists that delves into the complex behavior of memory.

In this fascinating study, Daniel L. Schacter explores instances of what we would consider memory failure—absent-mindedness, transience, blocking, misattribution, suggestibility, bias, and persistence—and suggests instead that these miscues are actually indications that memory is functioning as designed. Drawing from vivid scientific research and creative literature, as well as high-profile events in which memory has figured significantly (Bill Clinton's grand jury testimony, for instance), The Seven Sins of Memory provides a more nuanced understanding of how memory and the mind influence each other and shape our lives.

DANIEL L. SCHACTER is the William R. Kenan Jr. Professor of Psychology in the Department of Psychology at Harvard University. He has been elected to the National Academy of Sciences and received numerous awards for his research, including the Award for Distinguished Scientific Contributions to Psychology from the American Psychological Association and the Fred Kavli Distinguished Career Contributions Award from the Cognitive Neuroscience Society. He is the author of many books on memory and neuropsychology, including Searching for Memory, which received praise as a New York Times Notable Book of the Year and won the American Psychological Association’s William James Book Award, as did The Sevens Sins of Memory. Schacter lives in Newton, Massachusetts.