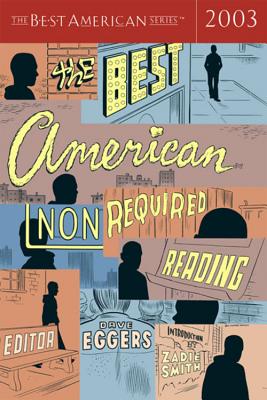 Since its inception in 1915, the Best American series has become the premier annual showcase for the country's finest short fiction and nonfiction. For each volume, the very best pieces are selected by an editor who is widely recognized as a leading writer in his or her field, making the Best American series the most respected -- and most popular -- of its kind.
Dave Eggers, who will be editing The Best American Nonrequired Reading annually, has once again chosen the best and least-expected fiction, nonfiction, satire, investigative reporting, alternative comics, and more from publications large, small, and on-line -- The Onion, The New Yorker, Shout, Time, Zoetrope, Tin House, Nerve.com,and McSweeney's, to name just a few. Read on for "Some of the best literature you haven't been reading . . . And it's fantastic. All of it." (St. Petersburg Times).