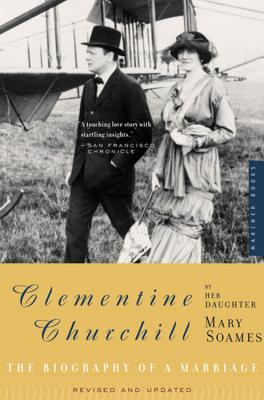 The Biography of a Marriage

Clementine Churchill — shy, passionate, and high-strung — shunned publicity but was in the limelight throughout her adult life. As a young woman, her character, intelligence, and good looks won the attention of the impetuous Winston Churchill. Their courtship was swift, but their marriage proved immensely strong, spanning many of the major events of the twentieth century. Written with affection and candor by the Churchills’ daughter Mary Soames, this revised and updated biography of a lionhearted couple’s life together is not only of historic interest but deeply moving.

Mary Soames, born in 1922, is the youngest and only surviving child of Winston and Clementine Churchill. During World War II she served in mixed antiaircraft batteries in England and northwestern Europe and accompanied her father as an aide on several wartime overseas journeys. In 1947 she married Captain Christopher Soames, later Lord Soames, the politician and diplomat, a vice president of the European Commission and the last governor of Southern Rhodesia. He died in 1987; they had five children. She is the author of Clementine Churchill: The Biography of a Marriage, which won the Wolfson Prize for history, A Churchill Family Album, The Profligate Duke, and Winston Churchill: His Life as a Painter.
Loading...
or support indie stores by buying on