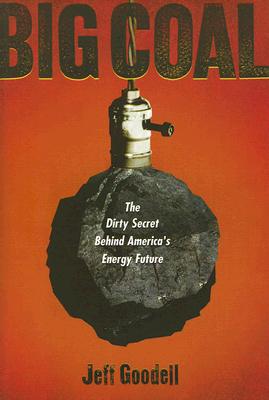 In the tradition of Rachel Carson and Eric Schlosser, the veteran journalist Jeff Goodell examines the danger behind President George W. Bush's recent assertion that coal is America's "economic destiny."

Despite a devastating, century-long legacy that has claimed millions of lives and ravaged the environment, coal has become hot again -- and will likely get hotter. In this penetrating analysis, Goodell debunks the faulty assumptions underlying coal's revival and shatters the myth of cheap coal energy. In a compelling blend of hard-hitting investigative reporting, history, and industry assessment, Goodell illuminates the stark economic imperatives America faces and the collusion of business and politics -- what is meant by "big coal" -- that have set us on the dangerous course toward reliance on this energy source.

Few of us realize that even today we burn a lump of coal every time we flip on a switch. Coal already supplies more than half the energy needed to power our iPods, laptops, lights -- anything we use that consumes electricity. Our desire to find a homegrown alternative to Mideast oil, the rising cost of oil and natural gas, and the fossil fuel-friendly mood in Washington will soon push our coal consumption through the roof. Because we have failed to develop alternative energy sources, coal has effectively become the default fuel for the twenty-first century.

Goodell, in this well-written, timely and powerful book, makes it crystal clear what the stakes are The New York Times

The hidden truth about coal is what Jeff Goodell is after in his groundbreaking book.
Bookpage

[Goodell] turns the light on the coal industry as he tracks the black rock on a bracing, eye-opening journey.
Audubon

Goodell has a talent for pithy argument - and the book fairly crackles with informed conviction.
Publishers Weekly, Starred