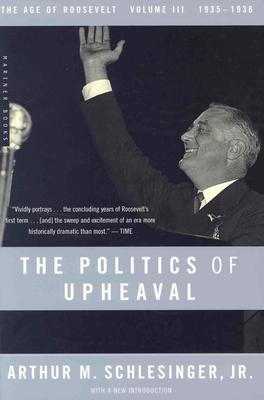 The Politics of Upheaval

The Politics of Upheaval, 1935-1936, volume three of Pulitzer Prize-winning historian and biographer Arthur M. Schlesinger, Jr.’s Age of Roosevelt series, concentrates on the turbulent concluding years of Franklin D. Roosevelt’s first term. A measure of economic recovery revived political conflict and emboldened FDR’s critics to denounce “that man in the White house.” To his left were demagogues — Huey Long, Father Coughlin, and Dr. Townsend. To his right were the champions of the old order — ex-president Herbert Hoover, the American Liberty League, and the august Supreme Court. For a time, the New Deal seemed to lose its momentum. But in 1935 FDR rallied and produced a legislative record even more impressive than the Hundred Days of 1933 — a set of statutes that transformed the social and economic landscape of American life. In 1936 FDR coasted to reelection on a landslide. Schlesinger has his usual touch with colorful personalities and draws a warmly sympathetic portrait of Alf M. Landon, the Republican candidate of 1936.