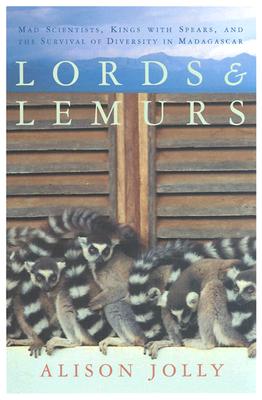 Mad Scientists, Kings With Spears, and the Survival of Diversity in Madagascar

In the extreme south of Madagascar is a place called Berenty, where Tandroy tribesmen, French lords, mad scientists, and two or three species of lemurs may be found gathered peacefully under a tamarind tree. Forty years ago Alison Jolly went to Berenty to study lemurs, and she has been enthralled by it ever since. In Lords and Lemurs she tells the story of the place, its people, and its other animals.
The owner of Berenty, Jean de Heaulme, arrived there in 1928 as a six-month-old baby, riding with his mother in the sidecar of his father's Harley-Davidson motorcycle. The de Heaulme family has lived at Berenty ever since, supporting Madagascar's fight for independence from France, serving in the government, and enduring economic turmoil, civil war, and even imprisonment. Although they are relics of a colonial system that seized land and tortured dissidents, the de Heaulmes also epitomize noblesse oblige in the best sense of the phrase, showing a remarkable sense of responsibility for both the people and the ecosystem of Berenty. Early on they set aside a large portion of their estate as a nature preserve, where lemurs and other animals have thrived over the years. Jean de Heaulme became a blood brother to one of the local Tandroy nobles -- the kings with spears. Traditionally the Tandroy were warriors who raided for women, cattle, and slaves. Now those who live at Berenty can take what they need from the modern world -- medical care, education, and a cash income -- without giving up their own customs and way of life. Many Tandroy still live in traditional villages surrounded by walls of thorn, and even the men who hold salaried jobs work hard so they can return to their clan with enough cattle to buy a bride or two. When a clan elder dies, the family offers a grandiose funeral where, amid gunfire and dancing and merrymaking and sex, a whole herd of zebu cattle is sacrificed to honor the new Ancestor -- even if he happens to be a Christian. Alison Jolly and her husband were honored to be invited to attend a Tandroy funeral.
Poignant and colorful, tragic and funny, Lords and Lemurs is a remarkable tale of one of the last great places on earth and the extraordinary people who live there, a tale of marriage, birth, and death, of spear fights and stink fights and dancing. It shows how human warmth and dignity can reach out beyond any social system.


Praise For Lords and Lemurs: Mad Scientists, Kings With Spears, and the Survival of Diversity in Madagascar…

Quirky and engaging... Vivid storytelling and perceptive insights into the natural and social worlds of Berenty make the tension between economic growth and environmental preservation come alive in human terms.
Publishers Weekly