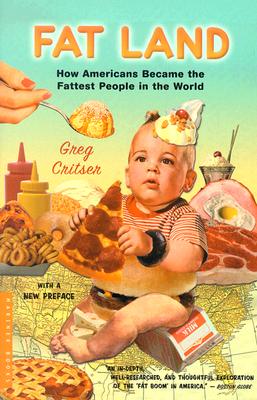 How Americans Became the Fattest People in the World

In this astonishing expose, journalist Greg Critser looks beyond the sensational headlines to reveal why nearly 60 percent of Americans are now overweight. Critser's sharp-eyed reportage and sharp-tongued analysis make for a disarmingly funny and truly alarming book. Critser investigates the many factors of American life -- from supersize to Super Mario, from high-fructose corn syrup to the high cost of physical education in schools -- that have converged and conspired to make us some of the fattest people on the planet. He also explains why pediatricians are treating conditions rarely before noticed in children, why Type 2 diabetes is on the rise, and how agribusiness has unwittingly altered the American diet.

GREG CRITSER is a longtime chronicler of the modern pharmaceutical industry and the politics of medicine. His columns and essays on the subject have appeared in Harper’s Magazine, USA Today, the Wall Street Journal, the L.A. Times, and elsewhere. Critser is the author of Fat Land: How Americans Became the Fattest People in the World (Houghton Mifflin), which the American Diabetes Association called “the definitive journalistic account of the modern obesity epidemic.” He lives in Pasadena, California, with his wife, Antoinette Mongelli.
Loading...
or support indie stores by buying on