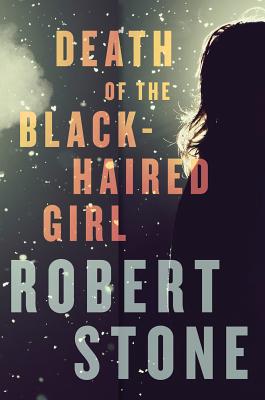 Death of the Black-Haired Girl (Hardcover)

“Robert Stone is a vastly intelligent and entertaining writer, a divinely troubled holy terror ever in pursuit of an absconded God and His purported love. Stone’s superb work with its gallery of remarkable characters is further enhanced here by his repellently smug professor, Steve Brookman, and the black-haired girl’s hopelessly grieving father, Eddie Stack." — Joy Williams

In an elite college in a once-decaying New England city, Steven Brookman has come to a decision. A brilliant but careless professor, he has determined that for the sake of his marriage, and his soul, he must extract himself from his relationship with Maud Stack, his electrifying student, whose papers are always late and too long yet always incandescent. But Maud is a young woman whose passions are not easily contained or curtailed, and their union will quickly yield tragic and far-reaching consequences.

As in Robert Stone’s most acclaimed novels, here he conjures a complex moral universe where nothing is black and white, even if the characters—always complicated, always compelling—wish it were. The stakes of Brookman and Maud’s relationship prove higher than either one could have anticipated, pitting individuals against one another and against the institutions meant to protect them.

Death of the Black-Haired Girl is a powerful tale of infidelity, accountability, the allure of youth, the promise of absolution, and the notion that madness is everywhere, in plain sight.

ROBERT STONE (1937-2015) was the acclaimed author of eight novels and two story collections, including Dog Soldiers, winner of the National Book Award, and Bear and His Daughter, a finalist for the Pulitzer Prize. His memoir, Prime Green, was published in 2007.


Praise For Death of the Black-Haired Girl…

"Anyone who loves fine fiction has no choice but to read this novel now."
—San Francisco Chronicle

"In his fiction, Robert Stone is immersed no less profoundly in envisioning the drama of human evil in action than was the great French Catholic novelist and Nobel Laureate, Francois Mauriac. Not only with his brilliant new novel, Death of the Black-Haired Girl but from the early novels such as Dog Soldiers and A Flag at Sunrise down to later books like Damascus Gate and Bay of Souls, he has demonstrated again and again that he is no less a master than Mauriac of the tragic novel—of depicting the fatal inner workings of revenge, hatred, betrayal, and zealotry—and that, like Mauriac, he is the pitiless guardian of a cast of sufferers on whose tribulations he manages to bestow a kind of shattered mercy."
—Philip Roth

"Stone imbues his characters with a rare depth that makes each one worthy of his or her own novel. With its atmosphere of dread starting on page one, this story will haunt readers for some time."
—Publishers Weekly

"Robert Stone is one of our transcendently great American novelists. In Death of the Black-Haired Girl he turns an unflinching gaze into the darkest crevices of the human psyche, where glimmers of redemption are extremely hard-won. This fast-paced, riveting novel reflects a vivid and unforgettable image of what we have made of ourselves, in this country, at the turn of 21st century so far."
—Madison Smartt Bell

"Robert Stone is a vastly intelligent and entertaining writer, a divinely troubled holy terror ever in pursuit of an absconded God and His purported love. Stone’s superb work with its gallery of remarkable characters is further enhanced here by his repellently smug professor, Steve Brookman, and the black-haired girl’s hopelessly grieving father, Eddie Stack."
—Joy Williams

"The death of a star student at an upper-crust university unsettles friends, faculty and family in a piercing novel from veteran novelist Stone...What emerges from Stone’s crisp storytelling is a critique of tribalism of all sorts—religious, academic, police—that doesn’t damn those institutions but reveals how they work to protect their own interests at the expense of those of others. An unusual but poised mix of noir and town-and-gown novel, bolstered by Stone’s well-honed observational skills."
—Kirkus, starred

"The publication of any book by Stone is a literary event; this one is no exception."
—Booklist, starred

“Complex, beguiling and brimming with emotion, this book turned me, an avowed literary-fiction reader, into a Robert Stone fan.”  — Real Simple

“[A] masterful glimpse at the indifference of the universe. As with all Stone's fiction, the complex characters are all wounded, but each has his or her own forgivably human story…Stone continues his search for compassion and meaning in a world with too little of each.”— Shelf Awareness

“At once unsparing and generous in its vision of humanity, by turns propulsive and poetic, ‘Death of the Black-Haired Girl’ is wise, brave, and beautifully just.” —Priscilla Gilman, The Boston Globe

“A compressed story with the swift metabolism of a thriller” —Alexandra Alter, Wall Street Journal

“Robert Stone, lapidary in his prose, is continent also in his output. Graham Greene is in some ways his most natural antecedent…[Stone] tackles a genre – frequently the thriller but, in the case of his latest book, the campus novel – and twists it to his purposes in ways that surprise and provoke. A subtle writer, he demands an attentive reader as he explores, through superficially familiar narratives, substantial themes.” —Claire Messud, New York Times Book Review

“In the hands of a master, this simple framework is woven into introspective narrative that will have you recalling the characters, questioning their motives and pondering their decisions for quite some time…a full inspection of faith, fate and family.” —The Oklahoman

“Behind the knowing air of Robert Stone’s brilliant, mysterious new novel, a vision lurks of America as a Puritanical, death-haunted country, where casual sins of the flesh stand in for crimes far more ancient and profound…[The novel is] a riff on the procedural whose pleasures are deeper than its lean page-count suggests. Stone uncoils these pleasures with taut, often graceful economy….“Death of the Black-Haired Girl” starts to feel less like Elmore Leonard and more like a descendant of Hawthorne, a moral fable bent on revelation. -- Mark Saunders, The Washington Post