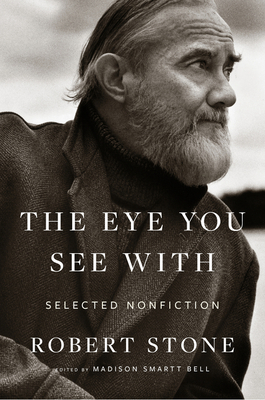 The Eye You See With

Praise For The Eye You See With: Selected Nonfiction…

One of Publishers Weekly's Top 10 "Essays & Literary Criticism" for Spring 2020  "They called [Robert Stone] a prophet in his time. A writer of ideas and character. An American cross of Greene and Conrad, with a dash of ole’ dead Melville for good measure...A new book of essays collects Stone’s best and most penetrating political journalism...What unites The Eye You See With is Stone’s staunch, singular vision. It’s ironic, sad, hopeful." —Matt Gallagher, LitHub, "Robert Stone's Journalism Set New Moral and Artistic High-Water Marks"   "Fine pieces...Nonfiction can show [Stone] at his most playful." —Joy Williams, Bookforum   "Novelist Bell presents a sterling collection of essays on literature, culture, politics, and war by the late Stone (1937–2015), best known for his National Book Award–winning novel Dog Soldiers. Spanning the 1970s to the aughts, the essays demonstrates Stone’s remarkable capacity for capturing an era’s ethos while making larger, and still current, points...Throughout, Bell provides useful biographical information, which in combination with the essays provides a vivid portrait of Stone’s background and guiding philosophy. Fans of Stone’s novels will especially appreciate the insight, but any reader of narrative nonfiction will find plenty of interest in this fine collection." —Publishers Weekly    "This first collection of Stone's nonfiction, edited by his biographer, Madison Smartt Bell [...] showcases the same dizzying welter of ideas and passions that defines Stone's landmark fiction...In [Stone's essay] 'What Fiction Is For,' he says that 'art is the only medium we have for removing a moment from the whirl of events and placing it under scrutiny in all its dimensions.' These essays, however, argue persuasively that, for Stone, nonfiction can do the same thing." —Booklist    "Robert Stone was one of those novelists who try to wrap their arms around America itself...A look back at the writer and his work, especially his earliest novels, turns out to be well timed. In books that deserve to endure, Stone anticipates the present in surprising, unsettling ways...[He was] a novelist who transformed our aspirations and follies into literature." —Ernesto Artillo, The Atlantic   "In addition to the biography, Child of Light, Bell has skillfully edited The Eye You See With, a broad selection of the novelist’s articles, essays, and other nonfiction pieces. The subjects Stone wrote about, as in his novels, range from accounts of the ravages of war in Vietnam to richly textured travel pieces set in Havana, Jerusalem, and other hot spots in-between...Stone got it right about the war, of course, and the disastrous effects on a generation of Americans. In both his fiction and nonfiction, he spoke in a uniquely mordant voice, in language that rang true in both high and low registers. Stone looked the heart of darkness in the eye and never flinched...The Eye You See With should drive admirers back to the work that first galvanized Robert Stone&r

MADISON SMARTT BELLis the author of thirteen novels, including All Soul’s Rising, which was a finalist for the National Book Award and the PEN/Faulkner Award, and two short story collections. In 2008, he received the Strauss Living Award from the American Academy of Arts and Letters. He is currently a professor of English at Goucher College and lives in Baltimore, Maryland.
Loading...
or
Not Currently Available for Direct Purchase