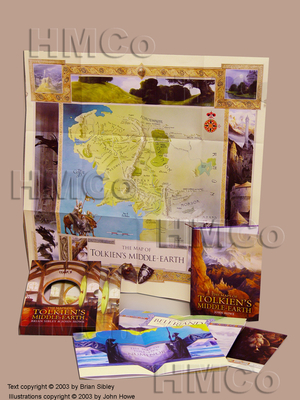 The Maps of Tolkien's Middle-earth

Best-selling Tolkien expert Brian Sibley (The Lord of the Rings: The Making of the Movie Trilogy and The Lord of the Rings Official Movie Guide) presents a slipcased collection of four full-color, large-format maps of Tolkien's imaginary realm illustrated by John Howe, a conceptual designer for the blockbuster films directed by Peter Jackson. The set includes a hardcover book describing in detail the importance and evolution of geography within Tolkien's epic fiction and four color maps presented with minimal folds, including two (Beleriand and Númenor) never before published in this country.

JOHN HOWE is an illustrator best known for his work based on J. R. R. Tolkien's worlds. Howe and noted Tolkien artist Alan Lee served as chief conceptual designers for both Peter Jackson's The Lord of the Rings and Hobbit movie trilogies, and he also re-illustrated the maps of The Lord of the Rings, The Hobbit, and The Silmarillion. In addition to his Tolkien-related work, he has illustrated numerous other fantastic worlds, including Anne McAffrey's Pern, a limited edition of George R.R. Martin's A Clash of Kings, and numerous cards for the game "Magic: The Gathering." He lives in Switzerland.

Brian Sibley is the author of The Map of Tolkien's Middle-earth, Chicken Run: Hatching the Movie, and The Land of Narnia: Exploring the World of C.S. Lewis. He lives in England.