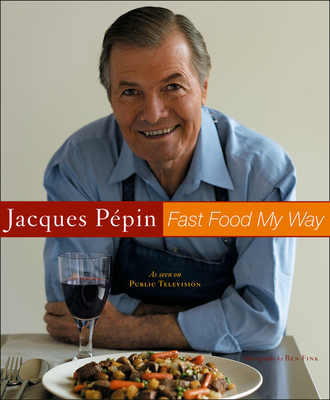 In Jacques Pépin Fast Food My Way, the man who taught millions of Americans how to cook shares the techniques he honed in the most famous kitchens of the world to show you how to create simple, special meals in minutes.

In this companion volume to his new series on public television, Jacques shows you how to create great-tasting dishes ranging from stunning salads such as Tomato and Mozzarella Fans to Supreme of Chicken with Balsamic Vinegar and Shallot Sauce to his breathtaking Almond Cake with Berries, all special enough for company, yet easy enough for those weekday evenings when you have no time.

Fast food Jacques’s way involves no compromises in taste but saves you hours in the kitchen. His Instant Beef Tenderloin Stew, for instance, not only is far faster to make than traditional versions, but tastes brighter and fresher. With concise, clear directions, Jacques shares the secrets of his kitchen. He teaches you how to season a salmon fillet perfectly and cook it in a low oven, right on the serving platter. You'll learn how to make a satisfying homemade vegetable soup in seconds, a baked potato in half the usual time, and a succulent roast that takes minutes, not hours, to prepare. He also shows you how to create elegant meals from convenience foods: a bean dip that will keep guests coming back for more, silky soups, and caramelized peaches made from canned peaches.

With Jacques Pépin Fast Food My Way at your side, the best food is always the simplest.

BEN FINK is an award-winning photographer whose work has been featured in Saveur, Bon Appetit,and Food & Wine magazines, as well as in several books, including the James Beard Award&#8211;winning Artisan Baking Across America. He is a member of Who's Who in American Photography and resides in New York City.