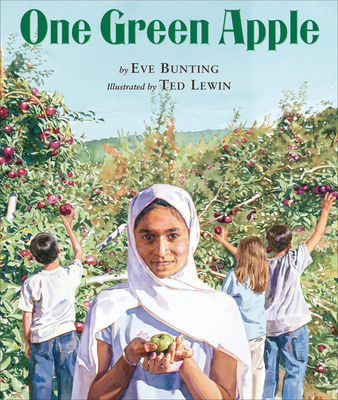 Farah feels alone, even when surrounded by her classmates. She listens and nods but doesn’t speak. It’s hard being the new kid in school, especially when you’re from another country and don’t know the language. Then, on a field trip to an apple orchard, Farah discovers there are lots of things that sound the same as they did at home, from dogs crunching their food to the ripple of friendly laughter. As she helps the class make apple cider, Farah connects with the other students and begins to feel that she belongs.


Praise For One Green Apple…

"A story of contrasts, ONE GREEN APPLE...leaves the reader with...[Farah's] first step...on a journey of change." — BookPage

"[A] gentle story about being new and different, with the author delivering her message in her classically subtle style." — Kirkus Reviews

Eve Bunting has written over two hundred books for children, including the Caldecott Medal-winning Smoky Night, illustrated by David Diaz, The Wall, Fly Away Home, and Train to Somewhere. She lives in Southern California.

Ted Lewin grew up in Buffalo, New York, with two brothers, one sister, two parents, a lion, an iguana, and a chimpanzee. He became interested in art as a young boy when he would draw his brothers' world of wrestling. Ted later worked as a professional wrestler to finance his studies at the Pratt Institute of Fine Arts, where he met his wife, Betsy Lewin, also a children's book writer and illustrator. He and his wife travel around the world to research the settings for their books. While working on SACRED RIVER, which he both wrote and illustrated, Ted joined thousands of Hindus on their pilgrimage to the banks of the Ganges River in Benares, India. Ted now lives and works in the brownstone he shares with his wife and their two cats in Brooklyn, New York. For more information visit www.tedlewin.com.