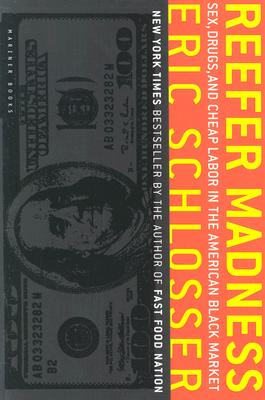 Sex, Drugs, and Cheap Labor in the American Black Market

America’s black market is much larger than we realize, and it affects us all deeply, whether or not we smoke pot, rent a risqué video, or pay our kids’ nannies in cash. In Reefer Madness the best-selling author of Fast Food Nation turns his exacting eye on the underbelly of the American marketplace and its far-reaching influence on our society. Exposing three American mainstays — pot, porn, and illegal immigrants — Eric Schlosser shows how the black market has burgeoned over the past several decades. He also draws compelling parallels between underground and overground: how tycoons and gangsters rise and fall, how new techonology shapes a market, how government intervention can reinvigorate black markets as well as mainstream ones, and how big business learns — and profits — from the underground.
Reefer Madness is a powerful investigation that illuminates the shadow economy and the culture that casts that shadow.

Eric Schlosser is a correspondent for The Atlantic. His work has also appeared in Rolling Stone, Vanity Fair, The Nation, and The New Yorker. He has received a National Magazine Award and a Sidney Hillman Foundation Award for reporting.
Loading...
or support indie stores by buying on