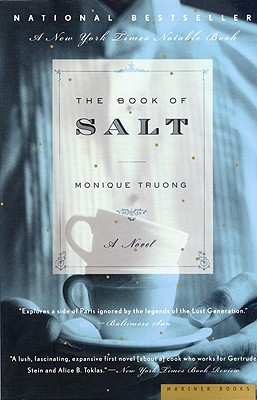 The Book Of Salt

A novel of Paris in the 1930s from the eyes of the Vietnamese cook employed by Gertrude Stein and Alice B. Toklas, by the author of The Sweetest Fruits.

Viewing his famous mesdames and their entourage from the kitchen of their rue de Fleurus home, Binh observes their domestic entanglements while seeking his own place in the world. In a mesmerizing tale of yearning and betrayal, Monique Truong explores Paris from the salons of its artists to the dark nightlife of its outsiders and exiles. She takes us back to Binh's youthful servitude in Saigon under colonial rule, to his life as a galley hand at sea, to his brief, fateful encounters in Paris with Paul Robeson and the young Ho Chi Minh.


Praise For The Book Of Salt: A Novel…

"...seductive tale of exile, memory, sex, identity, language, the sins of colonialism and the social and cultural politics of food." -The Miami Herald The Miami Herald

"If Monique Truong's stunning debut novel, The Book of Salt, doesn't win as many accolades as Jhumpa Lahiri's The Interpreter of Maladies, then the literary world needs new lenses through which to view Asian-American literature." - Out.com Out Magazine

" Dazzling...An exquisite, lyrical, challenging and funny debut by a writer to keep an eye on." -San Jose Mercury News 10 Best Books of the Year

MONIQUE TRUONG was born in Saigon in 1968 and moved to the United States at age six. She graduated from Yale University and the Columbia University School of Law, going on to specialize in intellectual property. Truong coedited the anthology Watermark: Vietnamese American Poetry and Prose. Her first novel,The Book of Salt, a national bestseller, was awarded the 2003 Bard Fiction Prize, the Stonewall Book Award-Barbara Gittings Literature Award, and the Young Lions Fiction Award, among other honors. Granting Truong an Award of Excellence, the Vietnamese American Studies Center at San Francisco State University called her "a pioneer in the field, as an academic, an advocate, and an artist."