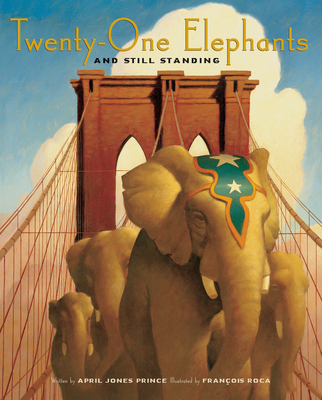 After fourteen years of construction, the Brooklyn Bridge was completed, much to the delight of the sister cities it connected: Brooklyn and New York City.

Fireworks and top hats filled the air in celebration when the magnificent bridge opened in 1883. But some wondered just how much weight the new bridge could hold. Was it truly safe?

One man seized the opportunity to show people in Brooklyn, New York and the world that the Brooklyn Bridge was in fact strong enough to hold even the heaviest of passengers. P. T. Barnum, creator of “The Greatest Show on Earth,” would present a show too big for the Big Top and too wondrous to forget.

"The design is crisp, the story is told with real poetry, and Roca's paintings are rich and warm. Both text and illustrations reflect the grandeur, if not the delightful absurdity, of this historic event." ––Booklist Booklist, ALA

"Using a rich palette of glowing golds and browns, Roca imbues the pachyderms with a calm solidity, sending them ambling past equally solid-looking buildings and over a truly monumental bridge-which soars over a striped Big Top tent in the final scene." ––Kirkus Reviews Kirkus Reviews

April Jones Prince is a children’s book author and freelance editor. She published Twenty-one Elephants and Still Standing, a story about P. T. Barnum and the Brooklyn Bridge, with Houghton Mifflin Harcourt.
Loading...
or
Not Currently Available for Direct Purchase