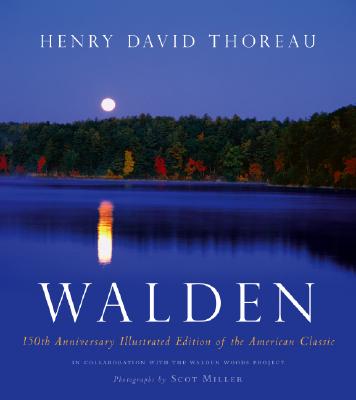 Now featuring an Introduction by Don Henley, founder of the Walden Woods Project, this beautiful commemorative edition of Thoreau's masterpiece features spectacular color photographs that capture Walden as vividly as Thoreau's words do.

Henry David Thoreau was just a few days short of his twenty-eighth birthday when he built a cabin on the shore of Walden Pond and began one of the most famous experiments in living in American history. Originally he was not, apparently, intending to write a book about his life at the pond, but nine years later, in August of 1854, Houghton Mifflin's predecessor, Ticknor and Fields, published Walden; or, aLife in the Woods. At the time the book was largely ignored, and it took five years to sell out the first printing of two thousand copies. It was not until 1862, the year of Thoreau's death, that the book was brought back into print, and it has never been out of print since. Published in hundreds of editions and translated into virtually every modern language, it has become one of the most widely read and influential books ever written. Proceeds from the sales of the book will be donated to the Walden Woods Project.

Henry David Thoreau was born in Concord, MA in 1817, and is best know for his influential work, Walden, which was published by Ticknor & Fields in 1854.

SCOT MILLER is a professional photographer whose photographs have appeared in numerous books and publications, including Walden: The 150th Anniversary Illustrated Edition of the American Classic and Cape Cod: Illustrated Edition of the American Classic. Miller lives in Dallas, Texas, with his wife, Marilyn, where they operate Sun to Moon Gallery, a fine art photography gallery.
Loading...
or
Not Currently Available for Direct Purchase