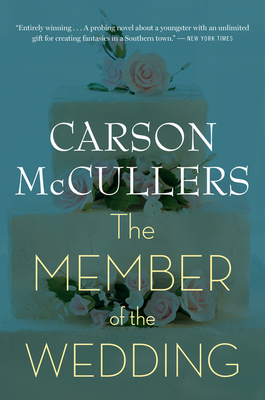 The Member Of The Wedding

From the master of Southern Gothic, Carson McCullers's coming-of-age story like no other about a young girl's fascination with her brother's wedding.


Twelve-year-old Frankie is utterly, hopelessly bored with life until she hears about her older brother’s wedding. Bolstered by lively conversations with her family maid, Berenice, and her six-year-old cousin??—??not to mention her own unbridled imagination??—??Frankie takes on an overly active role in the wedding, hoping even to go, uninvited, on the honeymoon, so deep is her desire to be a member of something larger, more accepting than herself.

Carson McCullers (1917-1967) was the author of numerous works of fiction and nonfiction, including The Heart is a Lonely Hunter, The Member of the Wedding, Reflections in a Golden Eye, and Clock Without Hands. Born in Columbus, Georgia, on February 19, 1917, she became a promising pianist and enrolled in the Juilliard School of Music in New York when she was seventeen, but lacking money for tuition, she never attended classes. Instead she studied writing at Columbia University, which ultimately led to The Heart Is a Lonely Hunter, the novel that made her an overnight literary sensation. On September 29, 1967, at age fifty, she died in Nyack, New York, where she is buried.
Loading...
or support indie stores by buying on