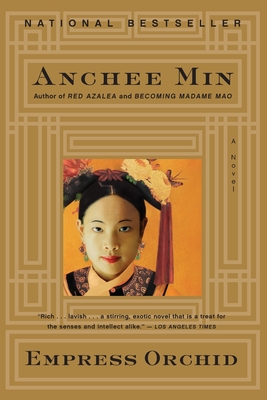 From a master of the historical novel, Empress Orchid sweeps readers into the heart of the Forbidden City to tell the fascinating story of a young concubine who becomes China’s last empress. Min introduces the beautiful Tzu Hsi, known as Orchid, and weaves an epic of a country girl who seized power through seduction, murder, and endless intrigue. When China is threatened by enemies, she alone seems capable of holding the country together.
In this “absorbing companion piece to her novel Becoming Madame Mao” (New York Times), readers and reading groups will once again be transported by Min’s lavish evocation of the Forbidden City in its last days of imperial glory and by her brilliant portrait of a flawed yet utterly compelling woman who survived, and ultimately dominated, a male world.

Anchee Min was born in Shanghai in 1957. At seventeen she was sent to a labor collective, where a talent scout for Madame Mao’s Shanghai Film Studio recruited her to work as a movie actress. She came to the United States in 1984 with the help of actress Joan Chen. Her memoir, Red Azalea, was named one of the New York Times Notable Books of 1994 and was an international bestseller, with rights sold in twenty countries. Her novels Becoming Madame Mao and Empress Orchid were published to critical acclaim and were national bestsellers. Her two other novels, Katherine and Wild Ginger, were published to wonderful reviews and impressive foreign sales.
or support indie stores by buying on