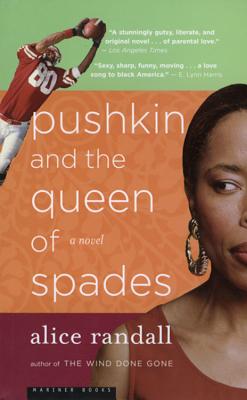 Pushkin and the Queen of Spades

Windsor Armstrong has a problem: her brilliant boy, Pushkin X, has become a football superstar and is planning to marry a Russian lap dancer. In Windsor's opinion, Pushkin is throwing away every good thing she has given him. When she was an unwed teen mother, Windsor attended Harvard, leaving her shady Detroit roots behind. She raised her son to be fiercely intelligent, well-spoken, and proud. Now he lives for pro football and a white woman of no account. Outraged by her son's decisions but devoted to loving him right, Windsor prepares to give up her last secret: the identity of Pushkin's father.

Alice Randall was born in Detroit and graduated from Harvard in 1981. After a start as a journalist in Washington, D.C., she moved to Nashville to become a country songwriter. The only African-American woman ever to write a number-one country song, she has had more than twenty songs recorded. She is also a screenwriter and has worked on adaptations of Their Eyes Were Watching God, Parting the Waters, and Brer Rabbit. Alice Randall is the author of The Wind Done Gone. She was awarded the Free Spirit Award in 2001 and the Literature Award of Excellence by the Memphis Black Writers Conference in 2002, and she was a finalist for the NAACP Image Award in 2002. She lives in Nashville, Tennessee.
Loading...
or support indie stores by buying on