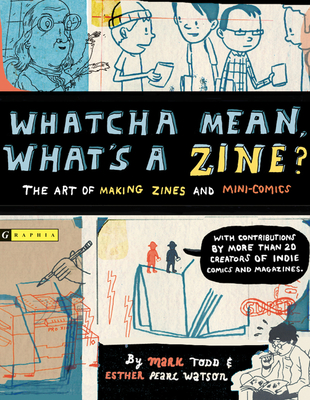 A zine is a handmade magazine or mini-comic about anything you can imagine: favorite bands, personal stories, subcultures, or collections. They contain diary entries, rants, interviews, and stories. They can be by one person or many, found in stores, traded at comic conventions, exchanged with friends, or given away for free. Zines are not a new idea: they’ve been around for years under various names (chapbooks, flyers, pamphlets). People with independent ideas have been getting their word out since before there were printing presses.

This book is for anyone who wants to create their own zine. It’s for learning tips and tricks from contributors who have been at the fore front of the zine movement. It’s for getting inspired to put thoughts and ideas down on paper. It’s for learning how to design and print your own zine so you can put it in others’ hands. Whatcha Mean, What’s a Zine? is for anyone who has something to say.

"This well-designed and entertaining resource is sure to find an audience among hip, artistic, and do-it-yourself enthusiasts." School Library Journal, Starred

Once they discovered zines, Mark Todd and Esther Pearl Watson never stopped making them. They’ve had illustrations in Rolling Stone and Entertainment Weekly and on CD covers and MTV; they’ve written and illustrated picture books; their paintings appear in art galleries—and still they keep making zines (and lots of friends while they’re at it). They live and work in southern California.

Like many kids raised in the 70's, Mark was influenced at an early age by Star Wars and comic books. Unlike many kids, he grew up just a few miles from the Vegas strip, its neon and glitz looming over the city. He graduated with honors from Art Center College of Design in Pasadena, California and currently lives and works in the Los Angeles area with his wife, artist Esther Pearl Watson, their daughter Lili and Mr. Pickles, a lovely French Bulldog.