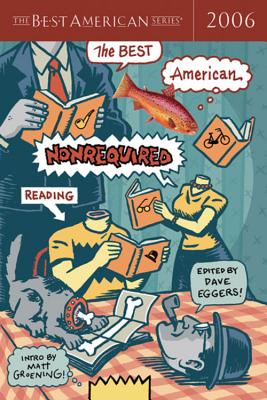 From Dave Eggers: For this year’s edition of The Best American Nonrequired Reading, we wanted to expand the scope of the book to include shorter pieces, and fragments of stories, and transcripts, screenplays, television scripts -- lots of things that we hadn’t included before. Our publisher readily agreed, and so you’ll see that this year’s edition is far more eclectic in form than previous editions. Along the way to making the book, we also came across a variety of things that didn’t fit neatly anywhere, but which we felt should be included, so we conceived the front section, which is a loose Best American roundup of notable words and sentences from 2005. It is, like this book in general, obviously and completely incomplete, but might be interesting nevertheless.