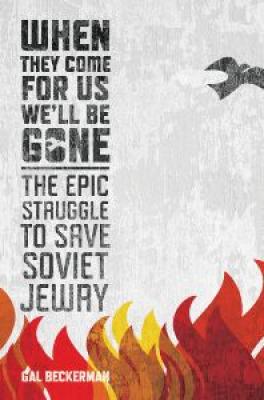 When They Come for Us, We'll Be Gone

The Epic Struggle to Save Soviet Jewry

At the end of World War II, nearly three million Jews were trapped inside the Soviet Union. They lived a paradox—unwanted by a repressive Stalinist state, yet forbidden to leave. When They Come for Us, We’ll Be Gone is the astonishing and inspiring story of their rescue.

Journalist Gal Beckerman draws on newly released Soviet government documents as well as hundreds of oral interviews with refuseniks, activists, Zionist “hooligans,” and Congressional staffers. He shows not only how the movement led to a mass exodus in 1989, but also how it shaped the American Jewish community, giving it a renewed sense of spiritual purpose and teaching it to flex its political muscle. He also makes a convincing case that the movement put human rights at the center of American foreign policy for the very first time, helping to end the Cold War.

In cinematic detail, the book introduces us to all the major players, from the flamboyant Meir Kahane, head of the paramilitary Jewish Defense League, to Soviet refusenik Natan Sharansky, who labored in a Siberian prison camp for over a decade, to Lynn Singer, the small, fiery Long Island housewife who went from organizing local rallies to strong-arming Soviet diplomats. This multi-generational saga, filled with suspense and packed with revelations, provides an essential missing piece of Cold War and Jewish history.


Praise For When They Come for Us, We'll Be Gone: The Epic Struggle to Save Soviet Jewry…

"Gal Beckerman has written the definitive account of what might be the most successful human rights campaign of our time. This is a wonderful book: The narrative is thrilling and propulsive; the writing is beautiful; and the research absolutely authoritative. The movement to free Soviet Jewry will be studied for years to come as a model of non-violent civil disobedience, and Gal Beckerman’s book will be read years from now as the masterwork on the subject."
—Jeffrey Goldberg, National Correspondent, The Atlantic, and author of Prisoners: A Story of Friendship and Terror

"Gal Beckerman’s book shines a long-needed spotlight on one of the great human rights struggles of the past century. It is dramatic, revelatory and deeply inspiring."
—Ron Rosenbaum, author of Explaining Hitler and The Shakespeare Wars

"Among the great liberation strivings of the twentieth century — civil rights in America, the end of apartheid in South Africa, the independence of India — one of the most painfully achieved was the exodus of Jews from Soviet oppression. Gal Beckerman recounts the historic trajectory of this grand assertion of human rights with passionate clarity and pellucid conviction. His tireless persistence in pursuit of a stirring heroic chronicle is itself a form of heroism."
—Cynthia Ozick

"Gal Beckerman has written the Parting the Waters of the Jewish experience. In this stirring epic   —   intellectually brilliant, historically authoritative and emotionally heartfelt in equal measure   —   he has chronicled one of the great liberation struggles of modern times. And he has placed himself at the apex of his generation of nonfiction writers."
—Samuel G. Freedman, author of Jew vs. Jew

"A beautifully written book with both depth and cinematic qualities."
—Gary Shteyngart, author of The Russian Debutante’s Handbook and Absurdistan


"A fascinating, deeply researched, and revealing account of the brave Jews in the Soviet Union and of those in the West who worked tirelessly on their behalf."
— Sir Martin Gilbert, author of Churchill: A Life

"At last, the Soviet Jewry movement has found its chronicler. To read this book is to relive the heroism and the heartache, the desperation and the jubilation that marked the long struggle to free Soviet Jews. This is a moving, reliable and memorable narrative of one of the greatest human rights dramas of our time."
— J onathan D. Sarna, Joseph H. & Belle R. Braun Professor of American Jewish History, Brandeis University, and author of American Judaism: A History "Colorfully fleshes out personal stories within the headlines . . . A comprehensive, contextually rich study. " -- Kirkus Reviews "Absorbing and inspiring . . . An outstanding chronicle of a great effort conducted by determined and courageous men and women." -- Booklist, starred review "Enthralling . . . A must read." -- Russian Life "Masterful and highly readable history."' -- The Forward"Comprehensive and readable . . .it's Beckerman's intimate portrait of the U.S. and Soviet outsiders that makes us care about their struggle." -- Newsday

"Remarkable... The author is gifted at weaving this very human and very political tale together." -- Cleveland Plain Dealer

"A brief review can scarcely compass the breadth and richness of Beckerman's narrative or do justice to the unimaginable physical and moral courage and the resourcefulness of the dissidents and refuseniks crowding his pages. His honest recounting of their human failings and rivalries makes their achievement all the more remarkable. Beckerman also reminds us of the extent to which contemporary American Jewry was shaped by this history. Struggles create leaders and the Soviet Jewry movement was no exception. His book constitutes a veritable who's who of American Jewish leaders, who early in their professional lives came of age, in one way or another, in the movement." -- Jewish Review of Books

"Beckerman’s riveting and important book shows that it took the grass-roots efforts of Jews around the world, as well as the power of the American government, to bring this story to a happy ending. If the movement to 'save Soviet Jewry' is not well remembered, Beckerman writes, it is because 'it is a victim of its own success.' Now that he has told the story so well, however, it will surely take its rightful place as one of the greatest dramas in modern Jewish history." -- Tablet

"When They Come for Us will be a standard text about the Soviet-Jewry movement for scholars, students, and general readers alike." --The Jewish Week

"Fresh, surprising and exceedingly well-researched... Beckerman wants to ensure that the story of this epic struggle isn't forgotten, and I hope that, with this excellent book, he succeeds." -- Anne Applebaum, Washington Post