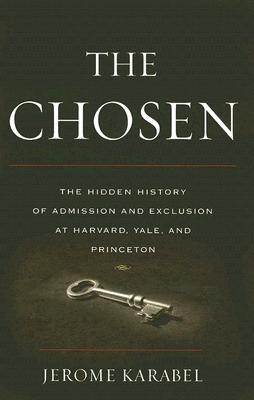 The Hidden History of Admission and Exclusion at Harvard, Yale, and Princeton

A landmark, revelatory history of admissions from 1900 to today—and how it shaped a nation

The competition for a spot in the Ivy League—widely considered the ticket to success—is fierce and getting fiercer. But the admissions policies of elite universities have long been both tightly controlled and shrouded in secrecy. In The Chosen, the Berkeley sociologist Jerome Karabel lifts the veil on a century of admission and exclusion at Harvard, Yale, and Princeton. How did the policies of our elite schools evolve? Whom have they let in and why? And what do those policies say about America?

A grand narrative brimming with insights, The Chosen provides a lens through which to examine some of the main events and movements of America in the twentieth century—from immigration restriction and the Great Depression to the dropping of the atomic bomb and the launching of Sputnik, from the Cold War to the triumph of the market ethos.

Many of Karabel’s findings are astonishing: the admission of blacks into the Ivy League wasn’t an idealistic response to the civil rights movement but a fearful reaction to inner-city riots; Yale and Princeton decided to accept women only after realizing that they were losing men to colleges (such as Harvard and Stanford) that had begun accepting “the second sex”; Harvard had a systematic quota on “intellectuals” until quite recently; and discrimination against Asian Americans in the 1980s mirrored the treatment of Jews earlier in the century.

Drawing on decades of meticulous research, Karabel shines a light on the ever-changing definition of “merit” in college admissions, showing how it shaped—and was shaped by—the country at large. Full of colorful characters, from FDR and Woodrow Wilson to Kingman Brewster and Archibald Cox, The Chosen charts the century-long battle over opportunity—and offers a new and deeply original perspective on American history.

Jerome Karabel is a professor of sociology at the University of California, Berkeley, and a senior fellow of the Longview Institute. An award-winning author, he has written for the New York Review of Books, the New York Times Book Review, the Nation, the New York Times, and the Los Angeles Times.

“In vivid and electrifying prose, Karabel exposes the intimate and occasionally scandalous social and political relationships that marked college admissions at the Big Three throughout the twentieth century. The Chosen is a refreshingly candid account of the admissions madness at elite colleges, where merit often functioned simply as a handmaiden to power.” -- Lani Guinier, Bennett Boskey Professor at Harvard Law School and coauthor of The Miner’s Canary

“Millions of Americans think of the Ivy League as a training ground for the best and brightest. But for most of the twentieth century Harvard, Yale, and Princeton were more interested in sustaining the aristocracy than in shaping the nation’s intellectual elite. Jerome Karabel’s marvelous study traces the titanic struggles that defined--and redefined--the Ivy ideal. An utterly absorbing account of politics and privilege on America’s most revered campuses.” -- Kevin Boyle, National Book Award-winning author of Arc of Justice

“This is a remarkable book. Until you read it, you can have no real idea how crudely these elite universities discriminated in admissions -- against women, Jews, blacks, and others. It is a staggering hidden history.” --Anthony Lewis, former New York Times columnist and author of Gideon’s Trumpet

“A magisterial and even-handed account of a vexed and important issue.” -- Justin Kaplan, Pulitzer Prize-winning author of Mr. Clemens and Mark Twain and Walt Whitman

“As someone who was chosen for Princeton a long time ago (but surely couldn’t get in now), I was fascinated by Jerome Karabel’s full and rich account of how my alma mater, and Harvard and Yale, picked us so often for all the wrong reasons. I learned much more about my species from reading The Chosen than everr I did when I was there myself, in flower.” -- Frank Deford, NPR commentator and author of The Old Ball Game

"The Chosen is a tour de force of investigative sociology. Burrowing into the Harvard, Yale, and Princeton archives, Karabel has found out where a lot of minds as well as bodies were buried, then exhumed them and dragged them into the light. Anyone who wishes to understand the shifting grounds of the American establishment should read The Chosen, get shocked by the raw bigotries of the past, and accept Karabel’s challenge to rethink the meritocratic ideal.” -- Todd Gitlin, professor of journalism and sociology, Columbia University, and author of The Sixties

“This dispassionate book deals with the reluctant, often painful, always controversial, processes by which the Big Three -- Harvard, Yale, Princeton -- have democratized themselves. The Chosen is a fascinating study in American cultural history." -- Arthur Schlesingerr, Jr., historian and Pulitzer Prize-winning author ooooof A Thousand Days


Praise For The Chosen: The Hidden History of Admission and Exclusion at Harvard, Yale, and Princeton…

"This is a remarkable book....It is a staggering hidden history." --Anthony Lewis

"Jerome Karabel's marvelous study traces the titanic struggles that defined -- and re-defined -- the Ivy ideal....Utterly absorbing." --Kevin Boyle, author of Arc of Justice: A Saga of Race, Civil Rights, and Murder in the Jazz Age

"The Chosen is a fascinating study in American cultural history." --Arthur Schlesinger, Jr.

“An eye-opening examination...Karabel writes clearly and well, and he has dug deep.” --Evan Thomas, Newsweek

“An informed and fascinating account of how America's elite universities have selected their student bodies over the past 100 years." --Nathan Glazer, Professor Emeritus of Sociology and Education, Harvard University

“A magisterial, thorough, and even-handed account of a vexed and important issue.” --Justin Kaplan, Pulitzer Prize-winning author of Mr. Clemens and Mark Twain and Walt Whitman

"[A] tour de force of investigative sociology . . . Anyone who wishes to understand the shifting grounds of the American establishment should read The Chosen, get shocked by the raw bigotries of the past, and accept Karabel’s challenge to rethink the meritocratic ideal." -- Todd Gitlin, professor of journalism and sociology at Columbia University and author of The Sixties

"A remarkable history of the admissions process of Harvard, Yale, and Princeton." --Malcolm Gladwell The New Yorker

"The special value of The Chosen lies...in its stories, its...apt statistics, and its analysis of backroom university politics." --Jeffrey Kittay The Washington Post