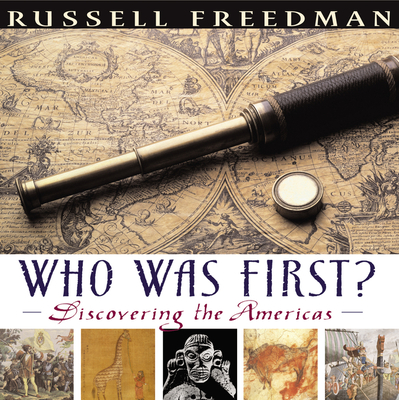 Many generations of American schoolchildren were taught that Columbus discovered America, and a holiday reminds us every October. But historical investigation in recent years has shown us otherwise. There is evidence that adventurers, explorers, traders, and nomads from various parts of the globe set foot on American soil long before 1492. And expeditions that landed in the Americas reported people already living there—indicating that America had been “discovered” before.
Russell Freedman brings his legendary skills as researcher and storyteller to this fresh and intriguing look at the American past. Colorful legends and first-person accounts are woven into the riveting narrative, which also illuminates the way historians and mapmakers have gathered, evaluated, and recorded information throughout the ages.

Praise For Who Was First?: Discovering the Americas…

Students will discover fascinating information as well as a fine example of the research process in this thought-provoking work.
School Library Journal, Starred

:"This well-designed, clearly written book looks at various ideas about the discovery of the Americas, including the famous voyages of Columbus in 1492, the claims that fifteenth-century Chinese explorer Zheng He may have salied to the Americas, and the now-documented settlement of Vikings in Newfoundland around the year 1000." Book Links, ALA

"Freedman has done it again, providing a well-organized, lucid, and engaging explanation of an important subject for middle-grade and middle school readers." Horn Book, Starred

Freedman provides an intriguing, fresh, and compelling view of traditional American history, taking readers beyond the familiar story of Columbus as the 'discoverer of America' and presenting new theories and possiblitites about who might have come to the Americas first and why.
VOYA (Voice of Youth Advocates)

A variety of illustrations from maps and models to dioramas and paintings embellish the text; a bibliography, index, and specific sources for quotations are also included.
Bulletin of the Center for Children's Books

Russell Freedman (1929-2018) received the Newbery Medal for Lincoln: A Photobiography. He was the recipient of three Newbery Honors, a National Humanities Medal, the Sibert Medal, the Orbis Pictus Award, and the Laura Ingalls Wilder Award, and was selected to give the 2006 May Hill Arbuthnot Honor Lecture. Mr. Freedman lived in New York City and traveled widely to research his books.
Loading...
or support indie stores by buying on
(This book is on backorder)