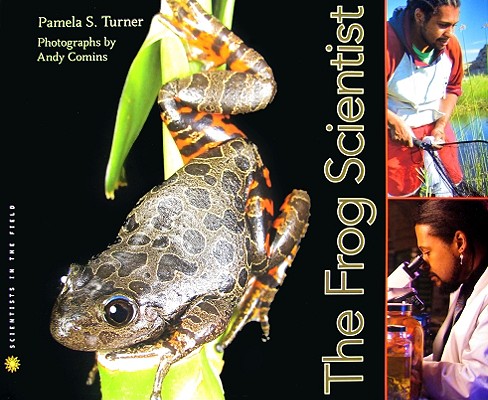 The Frog Scientist (Scientists in the Field Series)

The critically acclaimed Scientist in the Field book about how one boy’s interest in backyard science inspired a career in scientific discovery.

When Tyrone Hayes was growing up in South Carolina, he didn’t worry about pesticides. He just liked to collect frogs. Tyrone’s interest in science led him to Harvard University, and though he struggled at first, he found his calling in the research lab of an amphibian scientist.

Meanwhile, scientists discovered that all around the globe, frogs were dying. The decline has many causes, including habitat loss and disease. Tyrone discovered that the most commonly used pesticide in the United States, atrazine, may also play a role. Tyrone tested atrazine on frogs in his lab at Berkeley. He found that the chemical caused some of the male frogs to develop into bizarre half-male, half-female frogs. What was going on? That’s what Tyrone wants to find out.


Praise For The Frog Scientist (Scientists in the Field Series)…

"Hayes comes across as both a dedicated scientist and a regular person, willing to work hard in pursuit of his scientific work yet quick to laugh and joke with his family and the graduate students he mentors. The result is one of the most compelling portraits of a scientific career the series has produced. Sharp, vivid photographs alternate between portrayals of the scientists—at work in field and laboratory settings, as well as relaxing at lab picnics and at home—and the frogs they study. The abundant images of many different frog species allow readers to observe in detail each animal’s characteristics, including size, anatomy, and habitat."--Horn Book, STARRED review
". . . lively volume . . . Well organized and clearly written, the text goes into detail about the process of analyzing the chemical’s affects on the frogs, but pulls back from specifics to show how the experiment fits into the larger picture . . . Excellent color photos offer clear pictures of frogs and of this scientific team at work in the field and in the lab . . . Throughout the book, Turner portrays Hayes as both a colorful personality and a dedicated scientist: the final chapter opens with a discussion of his four ear piercings and concludes with an overview of his research. A vivid, realistic view of one scientist at work."--Booklist, STARRED review

". . . a nifty narrative that conveys science in action, offers some insight into environmental damage, and provides a vivid portrait of an energetic and charismatic (and hunky) young scientist who's clearly inspiring students to take an interest in the field. The visually appealing layout is thick with images of people, making it easy to envision the realities of biological work, and of frogs, from hopping to undergoing dissection . . . useful as an introduction to the creation and execution of an experiment, and it will therefore be invaluable in science classes."--The Bulletin of the Center for Children's Books, STARRED review

"Of the same sterling quality as Sy Montgomery's engaging The Tarantula Scientist (2004) or her exciting Quest for the Tree Kangaroo (2006, both Houghton), this new addition to a stellar series opens an upbeat window to the adult application of youthful enthusiasms."--School Library Journal, STARRED review

Andy Comins is a California photographer who specializes in portraiture and children's photography. His books include The Frog Scientist and Stronger Than Steel.
www.andycomins.com
Instagram: @amcomins

Pamela S. Turner has a master’s degree in public health from the University of California, Berkeley, and a special interest in microbiology and epidemiology. Her articles for children and adults have appeared in numerous scientific publications. Her books include Hachiko: The True Story of a Loyal Dog, Gorilla Doctors, The Frog Scientist, Dolphins of Shark Bay, and Project Seahorse. She lives in California.
www.pamelasturner.com
Loading...
or
Not Currently Available for Direct Purchase