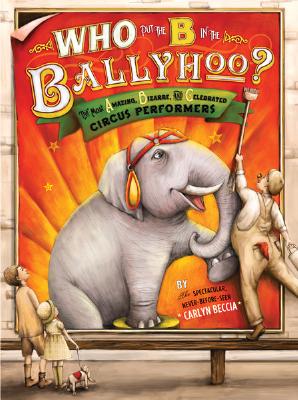 Who Put the B in the Ballyhoo?

Vintage-style circus posters capture the weird and the wonderful while fascinating sidebars reveal historical truths behind America’s circuses. What was it like when the circus came to town? This book, illustrated in rich oils, gives us a ringside seat.


Praise For Who Put the B in the Ballyhoo?…

What better way to evoke the Big Top's historical enticements? . . . Step right up.
Booklist, ALA

Today's readers may be as entranced by Beccia's depictions of such spectacles as their forebearers were by the real thing.
Publishers Weekly —

Carlyn Beccia's published works include Who Put the B in the Ballyhoo? and The Raucous Royals. The latter was inspired by her trip to Paris: “I went to Versailles,” she writes, “and discovered that Marie Antoinette never said her infamous line ‘Let them eat cake.’ Then I remembered also believing that Anne Boleyn had six fingers. After much digging, I discovered that one of her biographers after her death said she had an extra nail. A nail isn’t a finger. That discovery led to another rumor and then another.”