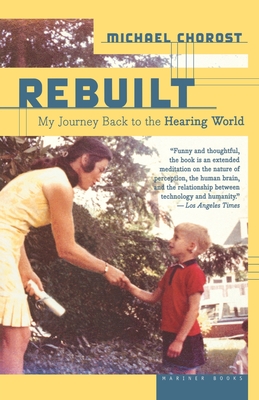 My Journey Back to the Hearing World

After Michael Chorost suddenly lost what was left of his hearing, he took the radical step of having a cochlear implant -- a tiny computer -- installed in his head. A technological marvel, the device not only restored to him the world of sound but also could be routinely upgraded with new software. Despite his intitial fear of the technology's potentially dehumanizing effects, Chorost's implant allowed him to connect with others in surprising ways: as a cyborg, he learned about love, joined a writing group, and formed deeper friendships. More profoundly, his perception of the world around him was dramatically altered.

Brimming with insight and written with charm and self-deprecating humor, Rebuilt unveils, in personal terms, the astounding possibilities of a new technological age.

Praise For Rebuilt: My Journey Back to the Hearing World…

"Funny and thoughtful...[Chorost's] awareness of life's fragility...strikes me as the perfect answer to opponents of implants...invaluable." --Alex Soojung-Kim Pang The Los Angeles Times —

Michael Chorost has a B.A. from Brown University and a Ph.D. from the University of Texas at Austin. He lives in San Francisco, where he writes, teaches, and consults.