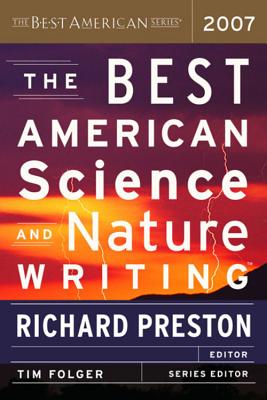 "Science is about not knowing and wanting badly to know. Science is about flawed and complicated human beings trying to use whatever tools they've got, along with their minds, to see something strange and new. In that sense, writing about science is just another way of writing about the human condition." -- from the introduction by Richard Preston

The twenty-eight pieces in The Best American Science and Nature Writing 2007 span a wide range of topics, from the farthest reaches of space to the everyday world around us to the secrets hiddin in our own bodies. Michael Lemonick travels to an extinct volcano in Hawaii, where telescopes at the summit are providing researchers with a glimpse of the most distant galaxy ever seen -- and profound new insights into the creation of the universe. Neil deGrasse Tyson takes a sharp, witty look at Americans' delirium over space travel. And with surgical precision Michael Perry describes how a medical autopsy is performed. Dead men can tell tales.

Here we also see examinations of the sometimes harmful impact of science on the natural world. Susan Casey gives an alarming portrait of plastic waste pollution in the world's oceans, including a dead zone in the mid-Pacific that's twice the size of Texas. Michael Shnayerson heads to West Virginia, where the Appalachians are being blasted at the rate of several ridgetops a week, all in the pursuit of ever-elusive coal. And Paul Bennett goes deep beneath Rome's streets, where cutting-edge excavation techniques are revealing newfound treasures in one of the world's oldest cities.

A profile of a late, distinguished British ornithologist by John Seabrook reveals that the man's personal collection of bird skins, now in the British Natural History Museum, was largely stolen or bought and intentionally mislabeled. Richard Conniff visits a former Brooklyn social worker turned primatologist who has become a fierce advocate of the lemur. And Patricia Gadsby takes us into the kitchens of Europe's finest chefs to explain how the new field of molecular gastronomy is revolutionizing fine cuisine.