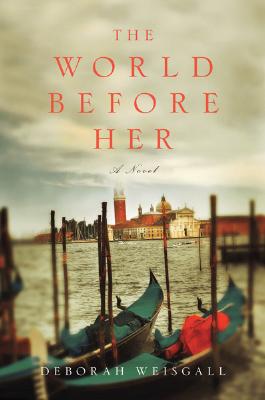 The World Before Her

A stunning novel about two women and two marriages -- George Eliot at the end of her life, and another woman a century later.

The year is 1880 and the setting is Venice. Marian Evans -- whose novels under the pen name George Eliot have placed her among the famed Englishwomen of her time -- has come to this enchanted city on her honeymoon. Newly married to John Cross, twenty years her junior, she hopes to put her guilt to rest. Marian lived, unmarried, with George Henry Lewes for twenty-five years, until his death. She took a tremendous risk and paid a high price for that illicit union, but she also achieved happiness and created art. Now she wants to love again. In this new marriage, in this romantic place, can this writer give herself the happy ending that she provided for Middlemarch’s Dorothea Brooke?

The parallel story of a sculptor named Caroline Spingold brings us to Venice one hundred years later, in 1980. Caroline’s powerful, wealthy older husband has brought her to the city against her will, to celebrate their tenth wedding anniversary. Having spent a perfect childhood summer in Venice with her parents, before her father left her mother, Caroline had vowed never to return.

In alternating chapters linked by the themes of art, love, and marriage, The World Before Her tells of these two women -- and their surprising similarities. In a city where the canals reflect memory as much as light, they both confront desire, and each assesses what she has and who she is. At the heart of this sumptuously and evocatively written novel lies the eternal dilemma of how to find love and sustain it, without losing one’s self.

Deborah Weisgall has written extensively about the arts — painting, music, performance — for the New York Times, the Atlantic, Esquire, Connoisseur, and The New Yorker. She is the author of the novel, Still Point, and the family memoir, A Joyful Noise. Weisgall lives with her husband and daughter in Lincoln, Massachusetts.
Loading...
or
Not Currently Available for Direct Purchase