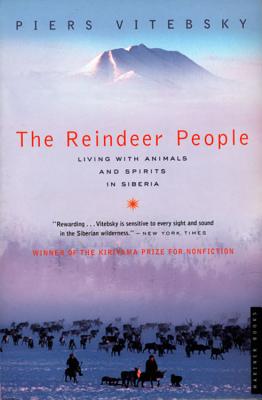 Living With Animals and Spirits in Siberia

Since the last Ice Age, the reindeer's extraordinary adaptation to cold has sustained human life over vast tracts of the earth's surface, providing meat, fur, and transport. Images carved into rocks and tattooed on the skin of mummies hint at ancient ideas about the reindeer's magical ability to carry the human soul on flights to the sun. These images pose one of the great mysteries of prehistory: the "reindeer revolution," in which Siberian native peoples tamed and saddled a species they had previously hunted.

Drawing on nearly twenty years of field work among the Eveny in northeast Siberia, Piers Vitebsky shows how Eveny social relations are formed through an intense partnership with these extraordinary animals as they migrate over the swamps, ice sheets, and mountain peaks of what in winter is the coldest inhabited region in the world. He reveals how indigenous ways of knowing involve a symbiotic ecology of mood between humans and reindeer, and he opens up an unprecedented understanding of nomadic movement, place, memory, habit, and innovation.

The Soviets' attempts to settle the nomads in villages undermined their self-reliance and mutual support. In an account both harrowing and funny, Vitebsky shows the Eveny's ambivalence toward productivity plans and medals and their subversion of political meetings designed to control them. The narrative gives a detailed and tender picture of how reindeer can act out or transform a person's destiny and of how prophetic dreaming about reindeer fills a gap left by the failed assurances of the state.

Vitebsky explores the Eveny experience of the cruelty of history through the unfolding and intertwining of their personal lives. The interplay of domestic life and power politics is both intimate and epic, as the reader follows the diverging fate of three charismatic but very different herding families through dangerous political and economic reforms. The book's gallery of unforgettable personalities includes shamans, psychics, wolves, bears, dogs, Communist Party bosses, daredevil aviators, fire and river spirits, and buried ancestors. The Reindeer People is a vivid and moving testimony to a Siberian native people's endurance and humor at the ecological limits of human existence.

PIERS VITEBSKY is the head of anthropology and Russian northern studies at the Scott Polar Research Institute at the University of Cambridge. His previous books include Shamanism and Dialogues with the Dead: The Discussion of Mortality Among the Sora of Eastern India. The Reindeer People has been selected as a finalist for the 2006 Kiriyama Prize in nonfiction.

Praise For The Reindeer People: Living With Animals and Spirits in Siberia…

"This immersion in the lives of some of the world's toughest and most resilient people is a powerfully lovely book." --Bill McKibben

"Remarkable." The Financial Times of London

"Like all the finest anthropology, this book entertains readers with descriptions of an alien culture, only to imbue them with a deeper sense of common humanity." The Times of London

"A wild and vividly described journey to Siberia." -- New Scientist

"Extraordinary fieldnotes from the remotest fringes of the reindeer economy . . . A Worthy companion to Arctic Dreams and other landmark books." Kirkus Reviews, Starred

"With grace, courage and sensitivity, Vitebsky reveals an extraordinary world, spinning a tale to warm any winter's night." Publishers Weekly, Starred
"This immersion in the lives of some of the world's toughest and most resilient people is a powerfully lovely book. It is also a kind of triple anthropology--of these ancient people, and of their relations with the Soviet and post-Soviet worlds." -- Bill McKibben

"If you read one book this year... read [The] Reindeer People. This book will grip and enlighten anyone... Like the reindeer themselves, this book takes wing." -- Daily Telegraph

"A wondrous, complex story...and Vitebsky tells it beautifully...Vitebsky's fascination with his subject and joyful attention to detail are what make this book stand out." -- Guardian

"Vitebsky is both an excellent scholar and a gifted writer, with a feeling for landscape and character and a knack for metaphor and allusion... Like all the finest anthropology, this book entertains readers with descriptions of an alien culture, only to imbue them with a deeper sense of common humanity." -- The Times

"A wild and vividly described journey to Siberia...Vitebsky draws us into a world where people, land, animals, and the seasons are part of a hard but also deeply spiritual existence." -- New Scientist

"A tender and highly personal piece of anthropology." -- Daily Mail

"So intimate, so revealing, and so moving...This book is required reading." -- Moscow Times

"The author captivates the reader with his delicate sense of human relations and sure grasp of the realities of Eveny liife at an extraordinary moment in history. The power of the narrative and the exquisite evocation of place make this book a masterpiece of anthropological writing." -- Professor Jean Briggs, Memorial University of Newfoundland, author of Never in Anger and Inuit Morality Play
or
Buy Here
Copyright © 2020 American Booksellers Association