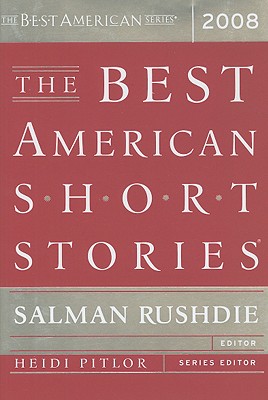 The Best American Short Stories 2008 gathers an array of inventive and unforgettable stories. Favorite and newcomer writers explore contemporary topics such as cloning, literary envy, cults, and teenage sex, as well as timeless subjects: love, sibling rivalry, immigration, and religion.
In Kevin Brockmeier's stunning "The Year of Silence," an unnamed city must face the absence of all sound, followed by an excess of noise. Katie Chase's bold and unsettling story, "Man and Wife," her first one published, brings to life an arranged marriage between a nine-year-old and a grown man. In A. M. Homes's "May We Be Forgiven," two brothers' rivalry undoes their marriages and eventually their lives. Nicole Krauss writes of an inherited desk that comes to represent the burden of memory for a poet in her beautiful story, "From the Desk of Daniel Varsky." And Stephen Millhauser's ingenious "The Wizard of West Orange" imagines Edison and his colleagues inventing machines dedicated to the sense of touch.
In his introduction, Salman Rushdie writes, "Some of these stories are immense, the so-called 'grand narratives' of nation, race, and faith, and others are small: family stories, and stories of elective affinities, of the friends we choose, the places we know, and the people we love; but we all live in and with and by stories, every day, whoever and wherever we are." The cultural relevance and intellectual potential of the short story are on display in this year's volume of the best-selling collection.