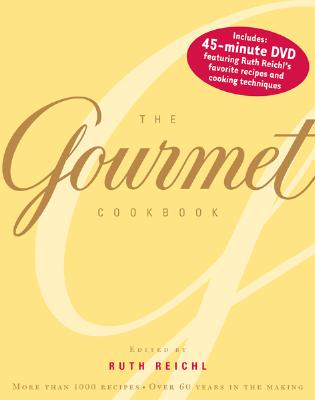 For the past six decades, Gourmet magazine has shaped the tastes of America, publishing the best work of the foremost names in the world of food. To create this landmark cookbook, editor in chief and celebrated authority Ruth Reichl and her staff sifted through more than 50,000 recipes. Many were developed exclusively for Gourmet's test kitchens. Others came from renowned food writers and chefs and from the magazine's far-flung readers. Then the editors embarked on an extraordinary series of cook-offs to find the most unforgettable dishes, testing and retesting each one to ensure impeccable results.
This collection, the only one of its kind, spans a vast range of cultures and cuisines. With it, you can go back to the time when Beef Wellington ruled the table or prepare something as contemporary as Crispy Artichoke "Flowers" with Salsa Verde. And whether you're cooking a simple supper for two or throwing a cocktail party for fifty, you'll make every dish with more flavor and more flair using The Gourmet Cookbook. It includes

* 102 hors d'oeuvres, dips, chips, pâtés, and first courses * exciting vegetable dishes -- more than 120 in all -- using everything from artichokes to yuca * versatile recipes for every available kind of seafood, with many suggested substitutes * hundreds of simple but exceptional dinners * festive dishes for every occasion, including a perfect roast turkey with stuffings, the ultimate standing rib roast, and even a gorgeous (but easy) wedding cake * definitive versions of all the classics, from Chicken Kiev to Crcme Brulée and from Bouillabaisse to Pad Thai * more than 50 pastas and risottos, from quick everyday meals to party dishes * scores of soups, salads, breakfast dishes, and sandwiches, including the editors' all-time favorite pizza * a wealth of sauces and salsas, to transform ordinary meals into spectacular ones * more than 300 desserts: cookies, pies, tarts, pastries, buckles, crumbles, ice creams, puddings, mousses, and cakes galore, including cheesecakes and the nine best chocolate cake recipes Gourmet has ever published

With engaging introductions to each chapter by Ruth Reichl, entertaining headnotes, indispensable information about ingredients and techniques, hundreds of tips from Gourmet's test kitchens, and an extensive glossary, The Gourmet Cookbook is the essential kitchen companion for anyone who wants one-of-a-kind recipes and spectacular results every time.

Ruth Reichl is the best-selling author of seven books. She was Editor in Chief of Gourmet Magazine from 1999 to 2009. Before that she was the restaurant critic of both The New York Times (1993–1999) and the Los Angeles Times (1984–1993), where she was also named food editor. As co-owner of The Swallow Restaurant from 1974 to 1977, she played a part in the culinary revolution that took place in Berkeley, California. In the years that followed, she served as restaurant critic for New West and California magazines. She has been honored with six James Beard Awards, was named Adweek’s Editor of the Year, and was the recipient of the Missouri Honor Medal for Distinguished Service and the Matrix Award for Magazines. She holds a B.A. and an M.A. in the History of Art from the University of Michigan and lives in upstate New York with her husband, Michael Singer, a television news producer.