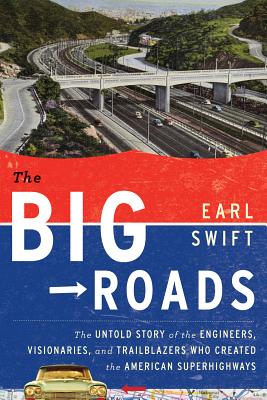 A man-made wonder, a connective network, an economic force, a bringer of blight and sprawl and the possibility of escape—the U.S. interstate system changed the face of our country. The Big Roads charts the creation of these essential American highways. From the turn-of-the-century car racing entrepreneur who spurred the citizen-led “Good Roads” movement, to the handful of driven engineers who conceived of the interstates and how they would work—years before President Eisenhower knew the plans existed—to the protests that erupted across the nation when highways reached the cities and found people unwilling to be uprooted in the name of progress, Swift follows a winding, fascinating route through twentieth-century American life.

How did we get from dirt tracks to expressways, from main streets to off-ramps, from mud to concrete and steel, in less than a century? Through decades of politics, activism, and marvels of engineering, we recognize in our highways the wanderlust, grand scale, and conflicting notions of citizenship and progress that define America.

"America’s interstate system tied together urban areas, bypassed thousands of small-town main streets, fanned the sprawl of suburbia, and sent millions of baby boomers on road trips with their parents, asking, ‘Are we there yet?’ With a great sense of how this changed the country, Earl Swift has told an intriguing tale of vision, personal sacrifice, and can-do determination." —Walter R. Borneman, author of Rival Rails: The Race to Build America’s Greatest Transcontinental Railroad"Objects in the rearview mirror prove eerily close on every page of this lively, eminently sensible history of the guardrailed monument to American mobility." —John R. Stilgoe, author of Train Time: Railroads and the Imminent Reshaping of the United States Landscape"A joy ride. Earl Swift has written the best kind of popular history--one that paints vivid portraits, debunks myths and brings to life the fascinating and appalling stories behind the creation of that massive mixed blessing known as America's interstate highways."—Bill Morris, author of Motor City"Swift has added texture and nuance, as well as narrative economy, to a story containing volumes, and he makes for an ideal traveling companion." —New York Times Book Review

"Travelers hitting the highways this summer might better appreciate the asphalt beneath their tires thanks to this engrossing history of the creation of the U.S. interstate system."—Los Angeles Times

"The book is a road geek’s treasure—and everyone who travels the highways ought to know these stories." —Kirkus

"Readers interested in urban planning as well as engineering will find a well-told story about a defining American feature." —Publishers Weekly

EARL SWIFT is the author of three previous books, including Where They Lay, a 2003 PEN finalist. He lives in Virginia with his daughter Saylor.