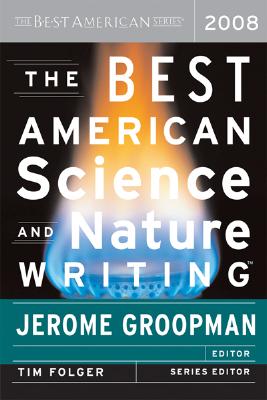 “The articles . . . draw the reader more tightly into the web of the world. They forge links in unexpected ways. They connect us to nature and to each other, and those connections nourish the intellect and uplift the spirit.”—Jerome Groopman, M.D., editor

This year’s Best American Science and Nature Writing offers another rich assortment of “fascinating science and impressive journalism” (New Scientist) culled from an array of periodicals, such as The New Yorker, Scientific American, and National Geographic. The twenty-four provocative and often visionary stories chosen by guest editor Jerome Groopman form an outstanding sampling of the very best in a field of writing that stays ahead of the curve, bringing important topics to the forefront of American discussion.
In “The Universe’s Invisible Hand,” Christopher Conselice takes us into the recent spectacular discovery of the crucial role of dark energy, which is making our universe expand faster and faster. Florence Williams tells the story of a more down-to-earth form of energy in “A Mighty Wind,” which describes how a small Danish island community is making great leaps in energy conservation by using innovative wind farms. John Cohen explores the marvelous world of ligers, zorses, wholphins, and other hybridized creatures in “Zonkeys Are Pretty Much My Favorite Animal.” And Robin Marantz Henig delves into the possibly hazardous ramifications of the rapidly expanding science of nanotechnology.
The Best American Science and Nature Writing 2008 packs a wallop of intriguing, informative, and wondrous stories, each one bringing with it, as Jerome Groopman writes, “a sense of excitement [to be] shared with others.”

Jerome Groopman, M.D., holds the Dina and Raphael Recanati Chair of Medicine at Harvard Medical School and is chief of experimental medicine at Beth Israel Deaconess Medical Center in Boston. A staff writer for The New Yorker, he is the author of How Doctors Think, The Anatomy of Hope, Second Opinions, The Measure of Our Days, and other books.