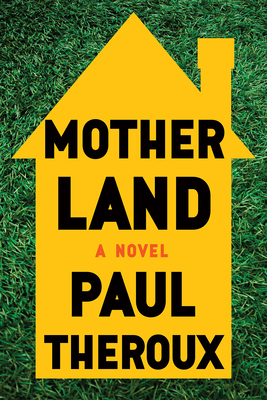 A richly detailed, darkly hilarious novel of a family held together and torn apart by its narcissistic matriarch

To those in her Cape Cod town, Mother is an exemplar of piety, frugality, and hard work. To her husband and seven children, she is the selfish, petty tyrant of Mother Land. She excels at playing her offspring against each other. Her favorite, Angela, died in childbirth; only Angela really understands her, she tells the others. The others include the officious lawyer, Fred; the uproarious professor, Floyd; a pair of inseparable sisters whose devotion to Mother has consumed their lives; and JP, the narrator, a successful writer whose work she disparages. As she lives well past the age of 100, her brood struggles with and among themselves to shed her viselike hold on them.

Mother Land is a piercing portrait of how a parent’s narcissism impacts a family. While the particulars of this tale are unique, Theroux encapsulates with acute clarity and wisdom a circumstance that is familiar to legions of readers. And beyond offering the shock and comfort of recognition, Mother Land presents for everyone an engrossing, heartbreaking, and often funny saga of a vast family that bickers, colludes, connives, and ultimately overcomes the painful ties that bind them.

“Reading Mother Land is like watching a slow-motion car crash…Mother Land is an exercise in mean-spirited score-settling. It’s also fun…the clambake in the assisted living facility where (Mother) celebrates her 102nd (birthday) is downright hilarious…Theroux possesses a fabulously nasty sense of humor…As for me, I enjoyed Mother Land against my will… a version of his cozening, calculating mother can be found in many homes. But I also found a little bit of myself here. Theroux ends up assassinating all of his characters, but I still enjoyed the play.” —Stephen King, NEW YORK TIMES BOOK REVIEW

“Delivers what is perhaps his most personal novel: an engrossing, emotionally tangled and often merciless examination of family and self… his prose succeeds. It excels when evoking the setting and weather. With painterly effect, he ties the Cape's harsh winters, muddy springs and splendid summers to the changing moods of his characters' relationships. Mother Land is a bittersweet, brutally frank family saga that offers enough redemption to make the journey worth it.”

“There is a thoroughly wised-up atmosphere… Theroux has always been a master at rendering regional accents in the right letters… This is indubitably pure Paul Theroux.” —THE HUDSON REVIEW

“Theroux's Mother Land is hilarious and wicked… If you’ve never had a problem parent, Paul Theroux has one for you in his overwritten, overlong yet irresistible new novel, Mother Land… devilishly funny… Theroux has fashioned an unforgettable character here (two, counting the wonderfully insufferable Floyd) -- and he has given us a family for the ages.” —THE BUFFALO NEWS

“Theroux has trafficked in troubled families before… But in Mother Land he takes it to a whole new level… antic and unpredictable… Jay’s portrait of the verbally extravagant Floyd (‘He hated a pithy declarative sentence like this one’) is a treat, whether they’re feuding or in cahoots… Theroux’s prose is suitably silky in its insinuations and vicious in its ability to claw... Theroux, fusing anguish and glee as he picks at the same raw scabs for 500-plus pages, evokes something truly memorable: a realm many come from, to which some of us have no desire to return.” —THE BOSTON GLOBE

“Page by page, his Mother Land is engrossing and amusing, a sharp-eyed domestic comedy of greed, resentment and the ties that strangle… The Justus kids are clearly defined characters, each with recognizable tics and traits, but they don’t change much over time… Without stooping to sentimentality, the resolution of Mother Land is both moving and apt, the comedy and the tragedy deployed in equal measure.” —PORTLAND PRESS HERALD

“The diminutive matriarch of a large Catholic family is the powerful center of Theroux’s engaging novel. Theroux creates an unsparing portrait of Mother… Theroux’s gifts for narrative drive and using darkly humorous descriptive details propel the plot through decades of the fractious lives of middle-aged siblings ceaselessly engaged in insults and rivalry to gain their mother’s favor. Mother’s 90th birthday party is the hilarious essence of family dysfunction” —PUBLISHERS WEEKLY

“As intense and searing a portrait of mother-as-monster as exists in literature… A fascinating, minutely observed portrait of family as both dictatorship and closed society, Mother Land is richly written and will enthrall fans.” —BOOKLIST

“Theroux's writing is robust as ever” —KIRKUS REVIEWS